How to Fix Facebook for iPhone 3.2 "Unable to Load this Page" and Login Problem

Facebook for iPhone version 3.2 was rolled out last night which brought support for the newly launched “Places” feature, support for background uploading of pictures and videos in iOS 4, along with other visual enhancements such as “Pull-to-Refresh” to iPhone. However for many users including myself, this new version was mostly broken, throwing “Unable to Load this Page” error on most pages. Oh and if you tried removing and reinstalling the app, it simply refuses to login. 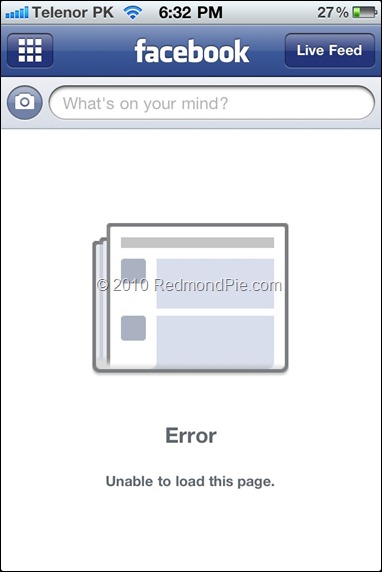 So as it turned out, the problem was occurring for jailbroken iPhone users who had BiteSMS app installed from Cydia. The new Facebook for iPhone 3.2 for whatever reasons is not compatible with the current version of BiteSMS. So if you have this app installed, uninstalling it from Cydia will fix the problem, at least it did for me. or you can alternatively try:

For those having issues using FB after the upgrade, do the following conditions apply?
*Jailbroken
*Have BiteSMS installed
*Have SBSettings installed
I opened SBSettings, More, Mobile Substrate Addons. I then disabled BiteSMSsb, resprung, and now FB works fine. Not sure what that addon does, but so far BiteSMS works fine, as does FB.

Hopefully a new version of BiteSMS will be rolled out soon which will by compatible with this new version of Facebook for iPhone. [Thanks to Bryan Norton for posting this on our Facebook Page]