The Flashback Trojan has caused quite a bit of panic among Mac users, having managed to infiltrate two thirds of a million computers worldwide. Apple has been working tirelessly to try and halt any further escalation, while those in the know have provided way for those affected to check and remove the problem from their stricken Mac.

Now, prominent security firm Kaspersky Lab has set up the impromptu site Flashbackcheck.com, which will check your Mac’s UUID against a list of infected machines. Usually, posting your UDID anywhere is not recommended, but in this case, it’s completely safe, and instructions for finding and entering your UUID is also included on the site. In the unfortunate event that your device has indeed been infected by the Trojan, Kaspersky will offer a free trial version of its removal software. 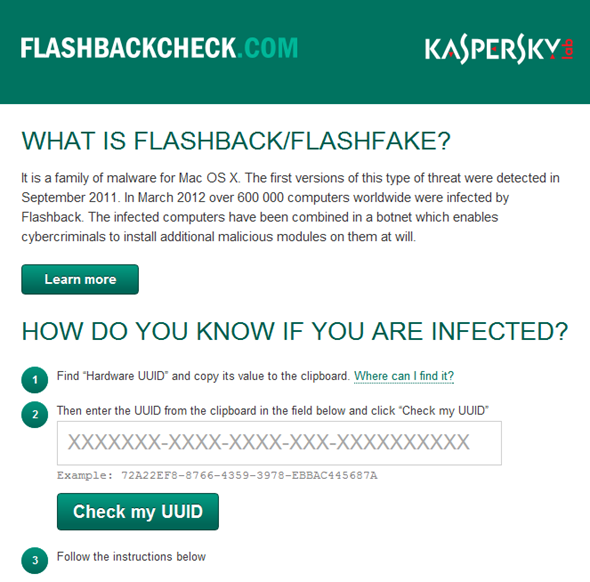 Renowned for being largely free of malware and large-scale virus outbreaks, this one has certainly taken the Mac world by surprise. The largest Mac-based infection to date, its demographics show developed countries as being the most affected. Unsurprisingly, the US has the most infected computers with just over 300,000, while nearly 100,000 Canadian Macs have also been hit. The UK and Australia have both seen around 40,000 Macs hit each, while France, Italy, Mexico, Spain, Germany and Japan make up the top 10 with comparatively low numbers.

Kaspersky’s experts found that of all the Flashfake infections, more than 98% of the computers were running OS X, and in all likelihood, the remaining 2% probably also consist of Apple computers. The company – a recognized brand name in the quest to rid computers of viruses, malware, and general bad stuff – also notes that incidents of Flashback seem to be on the decline from last week, which will certainly be music to the ears of Tim Cook and friends. The fruit company dropped two Java updates last week to try and exterminate Flashback, and it appears to be making the difference.

Users are also advised to keep checking for and apply any updates through the OS X Software Update system preference.

If you don’t wish to use Kaspersky – antivirus programs can, after all, be a partisan affair – then you can also check out the F-Secure guide on alleviating your system from Flashback.