If you are worried that you may have fallen foul of the Flashback Trojan, there is now an incredibly easy way to check your system after a new app was released for just that task.

The Flashback Trojan has already infected more than 600,000 Macs around the globe, and with Apple scrambling to release Java updates to try and alleviate the problem, many will find that the latest round of fixes have simply come too late. If you find yourself wondering whether your own Macs are infected with the Trojan, then you can now download a free apps Called FlashbackChecker which has been made available via Github. As you would expect, the app is free.

Downloading FlashbackChecker and then testing your own system could not be any easier. Download the app and then unzip the file. You’ll be left with one app that can simply be run from any location, and can be easily deleted afterwards.

Launching the app presents users with just one big button which invites users to ‘Check for Flashback Infection’.  Hitting that button does exactly what you would expect, and FlashbackChecker will go off and work out whether your machine is indeed infected or not. 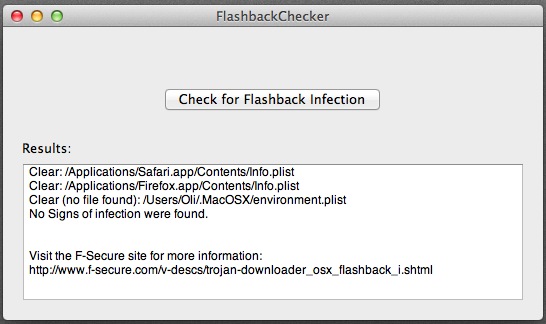 The process was extremely quick on the machines we tried it on, and thankfully none were infected. The app will not remove any infections should you be unlucky enough to have them, but F-Secure’s guide for removing an infection will see you right, should the need arise.

Assuming all goes well, and you are not infected by the Trojan, now is not the time to sit back and gloat. Make sure all OS X updates have been downloaded and installed if you want to minimize the risk of ever being infected by something like this. With the Mac believed to be almost immune to such attacks, many of us have become lax in our security methods and this should serve as a wakeup call for many. People will always seek to take control of our machines and our data, whether we are using a Mac or a PC.

It’s a dangerous world out there. Make sure you’re as protected as you can be.