Whenever Samsung drops a new flagship device, the company always seeks to outdo itself and indeed its rivals with a plethora of new and exciting software features. When the Galaxy S4 hit the market earlier on this year there were more such implementations than ever before, and the eye sensing feature, Smart Pause, which pauses video clips when a user looks away, has proved a solid gold hit with consumers. With Apple seemingly unlikely to add this kind of functionality to iOS anytime soon, iPhone users probably won’t be able to enjoy the same video viewing experience of their S4-owning rivals, but thanks to a new tweak by the name of FaceHalt, they now can, on a system level.

The first thing to note about FaceHalt, which can be found over at the famed BigBoss repository, is that it’s not as smooth and seamless as the eye sensor of the Galaxy S4. Not all video playback apps are currently supported, with the release notes adding that clients boasting custom video implementations, such as the newly re-released VLC for iOS, are not yet compatible. With that said, the developer is working on a solution, so in the near future, we should begin to see wider support from the FaceHalt tweak. 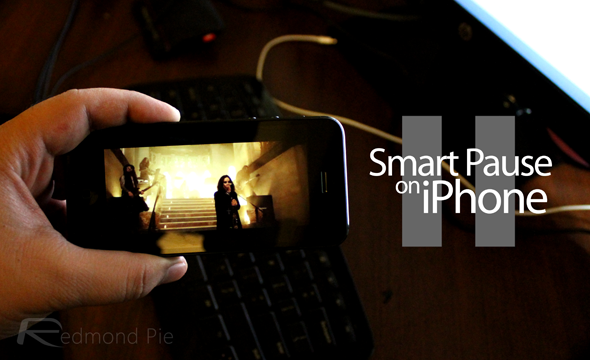 Once installed, FaceHalt will stop a video from playing as soon as you stop facing your display. This means you won’t miss an important bit of a movie, and if you’re constantly being interrupted, you won’t have the added annoyance of having to bring about the playback controls to continually be hitting the play/pause button.

You can manually pause your video if you so wish by double-tapping the pause button, and to continue playing while also re-activating the FaceHalt feature, all you need to do is press play.

The tweak, which costs $1.99, is compatible with the iPad 2, iPad 3, iPad 4, iPhone 4S, iPhone 5 and fifth-gen iPod touch. If you find yourself constantly watching videos on your iPhone, iPad or iPod touch, it’s definitely worth checking out, and although it could really do with a little work, is certainly more than usable as is.

If you’re not jailbroken, then you can give LookAway Player for iPhone a shot. It does pretty much the same thing, but is limited to its very own video player.