As Facebook continues its process of world domination, HTC has introduced a new phone with heavy Facebook integration. The Status, as it’s now called (formerly HTC ChaCha), is a new AT&T phone with many Facebook oriented features, including a dedicated Facebook button, making sharing content on Facebook just a few seconds away.

In addition to the Facebook button, there are also quite a few exclusive features across the board. The lock screen, for example, has been turned into a launch pad, allowing users to place shortcuts to their favorite Apps right there. The call screen has also been heavily transformed to display additional information about the person you’re calling, or who’s calling you, including their Facebook status and profile picture. 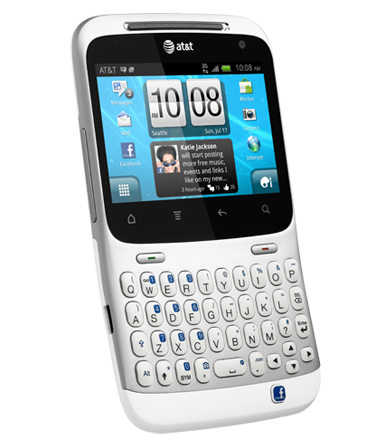 Beneath all the Facebook features, this is a fairly basic phone, but powerful enough for the audience it seems to be targeting. With a fairly small 2.6-inch 480×320 screen, 512 MB of RAM, an 800-MHz processor and front-facing and back cameras, this can be a perfect phone for those who are heavily involved in the social network. On top of that, the phone also supports photo effects, allowing users to spice up their photos as they’re taken, or later on from the pictures gallery. Available effects include Sepia, or Aqua for "a touch of cool", as HTC’s put it on its product page. HTC Americas President Jason Mackenzie highlighted the advantages:

With a dedicated Facebook share button combined with the hallmark HTC Sense experience, HTC Status makes it easy for people to stay connected to the things that are important to them.

Rumors of a "Facebook phone" began last year, shortly before Facebook publicly denied it was working on such a product. Rather than a Facebook-made phone, we instead saw HTC fill this market. A company that’s been so successful at making high-end Android and Windows Phone 7 handsets might be doing the right thing by diversifying its offering.

We don’t yet know when this phone will be available, or for how much, but expect it to be available exclusively through AT&T for around $99.99 later this year.

If you’re a heavy smartphone users, the small screen and rather clumsy look might put you off. On the other hand, if you’re a heavy Facebook user who enjoys sharing content with others as soon as you get your hands on it, this can be a perfect phone for you. Ready to post a picture of your new phone on Facebook?