When Facebook made its well-publicized purchase of Instagram last year for one billion dollars, many fans of the photo-sharing app feared the worst – that their beloved service was to become an extension of Facebook. Mark Zuckerberg has stuck to his promise to allow Instagram to retain its own identity, but much integration between the two has ensued, and in the latest, Facebook Messenger for iPhone has just been updated, adding, among other things, a new Instagram sharing feature.

Facebook 2.6 brings even stronger ties between one of Zuck’s main mobile apps and his newer, acquired service, with users now able to attach photos to messages from Instagram directly within the Messenger app.

As well as the Instagram sharing, there’s also a new attachment icon in the form of a paperclip, which allows users to quickly and easily share emjoi icons as well as Instagram images.

Facebook’s standalone Messenger app has been a relative success since it broke away from the official app, and with the company adding an array of features like Chat Heads, it’s slowly but surely becoming a service users can rely upon for most of their chatting and sharing needs.

With stickers having recently been added to the app, Facebook has certainly brought some fun back to the instant messaging circles, and although Messenger for iOS is not as involved as it is on Google’s Android thanks to Apple’s walled-garden of restriction, it’s still considerably better than it was a couple of months back. 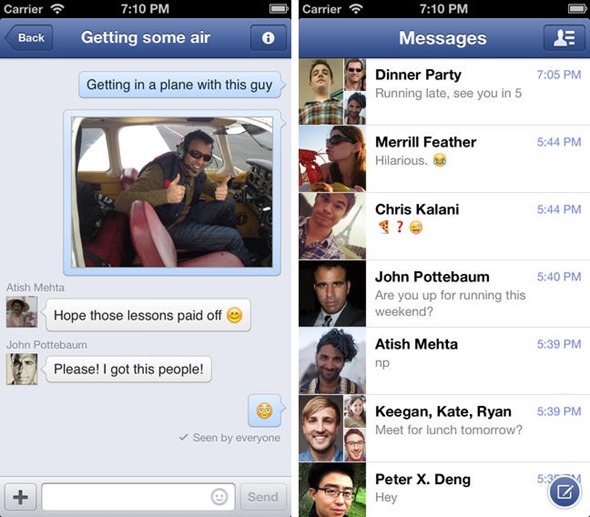 Along with those marquee features of the update, Facebook has also included the usual array of bug fixes and performance tweaks, so if you’ve been experiencing any niggling issues when using Facebook Messenger for iOS, be sure to check out version 2.6, which should rectify the situation.

You can download the updated app from the direct link below, or if you already have it installed, by simply using the App Store app’s update feature. Give it a whirl, and be sure to leave your thoughts on the new features by dropping us a line in the comments.