Facebook Enables Star Wars Lightsaber For Profile Pictures, Here’s How To Add One

Facebook is attempting to warm up the social community for the release of the Star Wars: The Force Awakens movie by offering up some profile picture magic. The world’s largest social network, which has made somewhat of a name for itself recently by offering free and temporary profile picture-based tools based on world events, is at it again, this time giving users the opportunity to thrust themselves into the position of a lightsaber wielding Jedi Knight for a pre-defined period of time during the launch of Disney’s first attempt at the Star Wars franchise.

Unless you’ve been hiding under a rock for the last few weeks you’ll probably be well aware that the latest edition to the Star Wars franchise, The Force Awakens, hits theaters this week. Facebook has showed willing in the past to offer users the ability to temporarily change their profile picture based on prominent worldwide events. To date, the social network has supported Pride, allowed account holders to show support for their college football team, as well as offer support and unity with Paris in the wake of the recent atrocities on French soil. Now it’s time to turn your attention to the newest Star Wars movie. 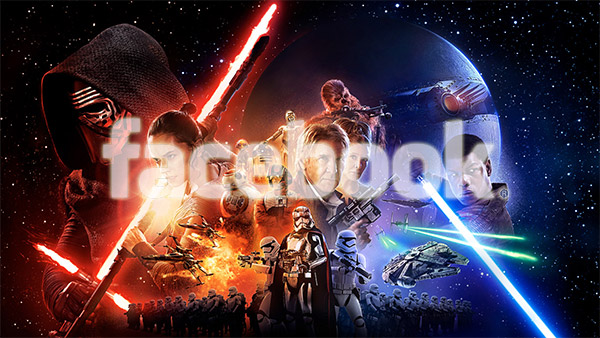 Those interested in the short-term transformation will be able to pick their side. Would you prefer to fight on the side of good and morality by choosing to yield a beautiful blue lightsaber representing your commitment to positivity? Or, are you in the type of mood where you think you’d rather let your friends and connections see you waving the red crossguard lightsaber wielded by Kylo Ren? Both options have been made available by Facebook, so the choice really is yours.

If you’re super excited for the launch of the new movie, and want to express that excitement with a themed profile picture on Facebook, then all you need to do is visit the Star Wars Facebook page’s official timeline, locate the post which reads “Change your profile picture to show you’re a fan of Star Wars” and click the “Try it” button. Facebook will then take over by allowing you to create your very own profile picture, as well as set an expiration date that will define when your profile picture changes back to your old one. Alternatively you can head over to facebook.com/gameface, and select Star Wars from the list. 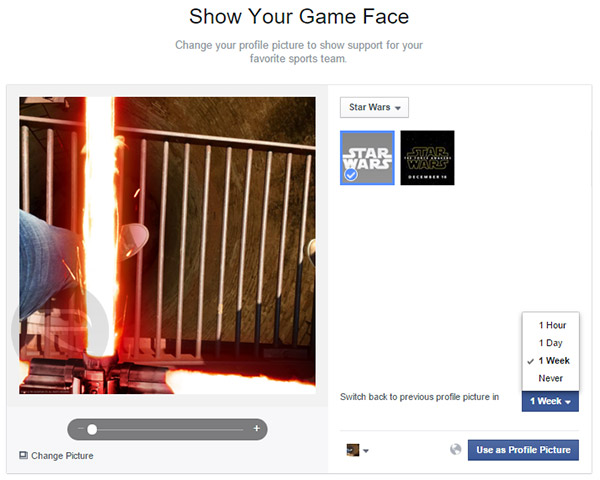 Everyone else seems to be attempting to cash in on the insane hype that’s surrounding The Force Awakens, so we can’t really judge Facebook for doing the same and offering something fun in the process.