At about 7 PM local time, an explosion at a Foxconn factory killed 2 people and injured 12, 3 of those seriously. The building is located in Chengdu, a high-tech region in the South of China, and is known for manufacturing iPads. The explosion was first revealed to the world thanks to an amateur video. It’s been reported that this incident might have been caused by fine powder used in the manufacturing process that somehow ignited. 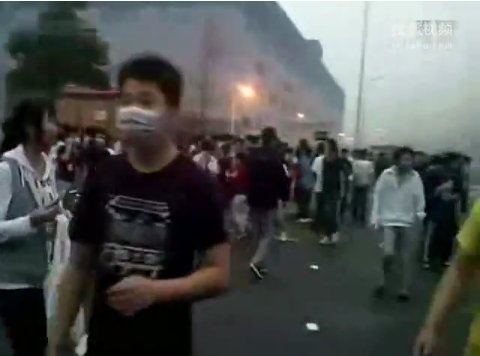 While Apple didn’t immediately reply for comment, a Foxconn spokesperson has acknowledged the incident but didn’t give any additional information. Meanwhile, law enforcement and firefighters were sent to the facility employing roughly 100,000 people and managed to take control of the situation shortly after. The cause for this explosion is unknown, but the City Government has ruled out foul play and attributed this incident to a technical fault.

In the beginning of the last decade, Apple used to manufacture most of its products at US-based factories, but during the early 2000s, the maker felt the need to cut costs while keeping up with increased demand, which led to the closing of virtually all manufacturing operations in the United States and Europe. Over the last decade, many other makers have felt the need to hire contract manufacturers to assemble their products, while shedding their own manufacturing workforce. Foxconn is one of those contract companies responsible for assembling many electronics we use on a daily basis, such as laptops of many brands, including MacBooks; iPads, iPhones and even some Nokia phones. This form of manufacturing is less costly for the maker, which results in cheaper electronics, but also in lower labor standards and accidents such as this one.

Foxconn hasn’t been known for the highest transparency or worker standards either. Over the years, several workers, forced to take over time, attempted, sometimes successfully, to commit suicides. In response, the company has reduced overtime, raised salaries and held internal rallies to motivate workers. That resulted in fewer suicides, but also in lost profits, as the company announced a loss last quarter, which will cause production to be moved to cheaper facilities.

Behind the shiny aluminum electronics we use everyday, there are overworked people, and sooner or later we’ll have to choose between paying a little bit more for fair working conditions, or holding on to our cheaper but still premium-priced electronics.

UPDATE: It’s been confirmed that one of the 16 injured passed away, and 9 others remain in the hospital. Meanwhile, the company claims that the accident was caused by "an explosion of combustible dust in a duct” and temporarily halted all work in the building.