iOS is undoubtedly a great mobile OS. Despite losing out to Android in terms of sheer activations, customer polls suggest iPhone users are not only happier with their devices, but more likely to stick with Apple’s smartphone range should they outlive their increasingly lengthy contract expiration dates. 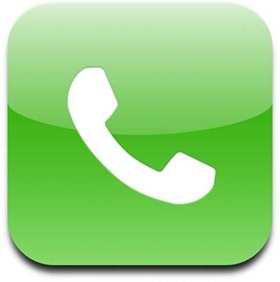 It’s also a lot more stable than offerings from Google and Microsoft, as well as less susceptible to malware and other generally not-nice stuff. Having heaped on the praise, iOS is ruled by Apple’s iron fist, and is therefore limited in areas, with small oversights and omissions often becoming large in their counter-productivity.

For those on A4 devices (and with any luck, very soon, A5), help is at hand, for the Cydia Store offers jailbreakers a whole host of tweaks to plug the voids left by the Cupertino company. While John Q. Public was stuck with a poor notification “structure” pre-iOS 5, those unleashed via JailbreakMe, Greenpois0n and Redsn0w were in sync with their device’s ins and outs thanks to MobileNotifier, Notified et al.

Cydia is home to many tweaks which simplify the general user experience, and today’s feature is no exception. StartDial vastly improves the native Phone app, enabling you to select which segment you would like to be met with the Phone icon is pressed. For example, if when you open the Phone app, you wish to see the keypad, you can make the keypad the default screen whenever you launch it; same with Contacts, Favorites and Recents. Simple, but extremely effective, non? 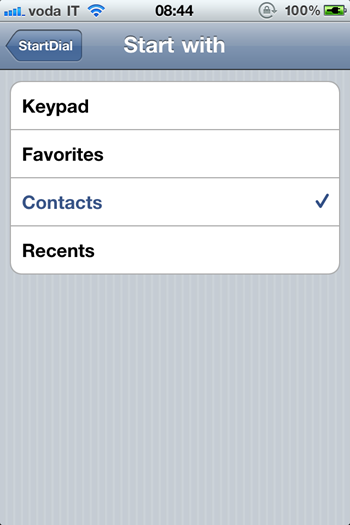 In addition, you can also banish the oft-annoying voicemail button, which does get in the way – particularly when operating with one hand. 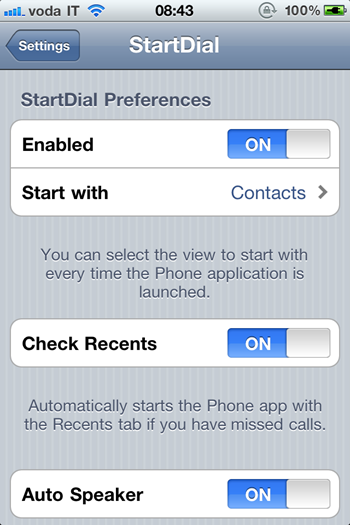 Believe it or not, StartDial is absolutely FREE, and available over at the ModMyi Repo. If you’re one of those strange individuals that uses your phone to make calls (apparently it does still happen in parts of the world), then we highly recommend this free tweak, which works smoothly after testing on an iPhone 4 running iOS 5.0.1.