Enable Two-Step Verification In WhatsApp Android Beta 2.16.346 And Over, Here’s How

You can now enable two-step verification in WhatsApp for Android beta 2.16.346 APK for the first time, with the latest beta version of the Android app playing host to the new feature, among some other features.

Available to download right now from the Google Play Store if registered as a beta tester, or directly from below, users of version number 2.16.346 and later will be able to configure and enable two-step verification right now.

Getting the ball rolling is a simple affair. Simply heading on over to the WhatsApp account settings page within the app, which will then reveal the option to enable two-step verification. What follows is a short description of what two-step verification actually is and what it will do, with users required to enter a 6-digit PIN and finally an email address before the additional security is enabled.

Once that process is complete, anyone wishing to configure WhatsApp on a new device will need to know the newly-created 6-digit PIN or have access to the email address that was provided as a get-out-of-jail-free card should a user forget their PIN.

The whole process takes no time at all and is certainly worth enabling even if you are not the most security-conscious person in the world. After all, with such a low barrier to entry and a minuscule time investment required, why wouldn’t you take a couple of minutes to configure WhatsApp’s two-step verification right now? 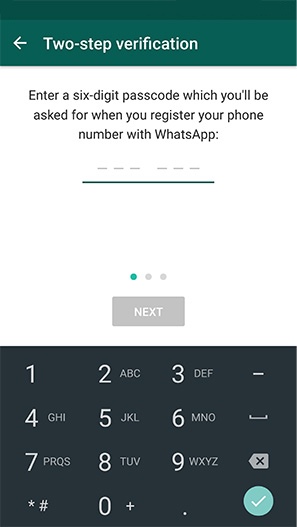 As mentioned earlier, beefed up security isn’t the only thing that’s new in the latest version, though, with the beta app now capable of playing audio messages in the background. The feature could prove to be useful for longer audio messages during which a user might want to jump out of the app and into another task.

WhatsApp’s Android app is certainly no stranger to updates, having received them at a steady pace during the development cycle. We expect that to continue, so any potential issues experienced as part of this new feature will hopefully be rectified in due course. That’s what beta builds of software are for, after all. As for the iOS variant of the app, it is yet unclear when it will be receiving the same update.