tvOS 10.1.1 and watchOS 3.1.3 for Apple TV and Apple Watch respectively are available to download and install right now on all compatible devices.

The official public release of both platforms follows on from a number of initial beta releases to the development community for testing and feedback purposes, as both platforms become available to download and install straight away. 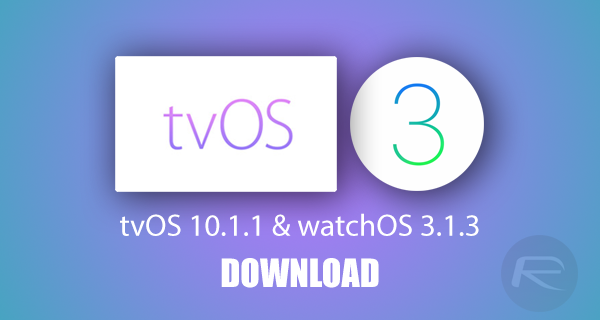 As you might have guessed from the quick turn-around of tvOS 10.1.1, and the fact that it’s very much a minor point release, Apple is looking to simply progress and streamline the platform with the release rather than introduce any wholesale functionality or feature improvements. To that end, tvOS 10.1.1 is about continuation and performance, introducing bug fixes and improvements to resolve any issues found after the recent release of tvOS 10.1.

Apple TV owners with any experience of software updates will know exactly how to get this latest public version of tvOS installed on their device. As the firmware propagates through Apple’s download and update servers, version 10.1.1 will start to show as an available software upgrade on devices around the world. It’s then simply a case of going through an over-the-air update to get the latest software on the device.

For more in-depth instructions on how to install tvOS update on Apple TV, follow our guide here.

Similar to tvOS 10.1.1, Apple’s latest watchOS 3.1.3 update is very much about building on top of what has previously been released and ensuring that the platform is as stable as it possibly can be at this stage. The Cupertino company’s engineers have focused on building in fixes and enhancements that will improve the overall fluidity and responsiveness of Apple Watches running this 3.1.x update. That applies to all owners of the original Apple Watch, as well as those who own a Series 1 or Series 2 version of Apple’s fantastic intelligent timepiece.

Apple Watch owners will have eagerly been waiting for this release to see what Apple introduces for their hardware. The update is propagating through Apple’s download and update servers right now, which means that it will soon start showing up as an update via the Watch app on the connected iPhone, if it hasn’t already. Simply use that app to go through the process of updating the firmware on the Apple Watch.

For more in-depth instructions on how to install watchOS update on Apple Watch, follow our guide on it here.