LucasArts Entertainment Company (LLC) – an American video game developer and a huge game publishing giant has stepped in the iPhone market recently with a remake of it’s classic game, originally released on PC in 1990 – The Secret of Monkey Island: Special Edition on iPhone. The company has been popular since the mid 1990s for its great graphic adventure games. The internationally acclaimed game with multiple sequels has already been able to gather a huge fan following.

Just a few weeks back, The Secret of Monkey Island: Special Edition was released for the PC, Xbox Live Arcade and for the iPhone. iPhone version is priced at $7.99 taking up 351MB of space on your device.

The Secret of Monkey Island: Special Edition is a new revised version of the original classic. The game is all about Guybrush Threepwood who wants to be the most notorious pirate in the Caribbean. You are the hero (Threepwood) who has to go through three trials to become a pirate. This version has a new art style and allows you to switch to the classic version as well. It also features voice-overs by the original cast, an excellent musical score, fresh looking interface, and a hint system of three levels. 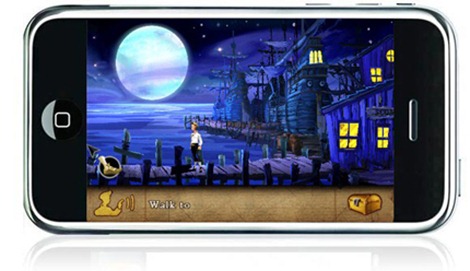 “Pirates! Adventure! Monkeys! Re-live the hilarious swashbucling misadventures of the wannabe pirate Guybrush Threepwood as he attempts to become the most infamous pirate in the Caribbean!

To see the game in action, check out the following video:

The original game is considered to be one of the best adventure games ever and hopefully the iPhone version will rock as well. Please do check it out and let me know of your comments. I hope you enjoy it as much as I did on my iPhone.