OS X 10.11 El Capitan Developer beta 1 download is now available. If your’e a registered developer on the Apple Developer Program then here’s how you can get your hands on Cupertino’s latest desktop OS.

The new desktop OS from Cupertino is not the major revamp some users had been anticipating it to be, but it does build on Yosemite’s advanced feature set and takes it even further. Apple is not introducing substantial new features and magic tricks, but it is making sure that the overall experience is a rather rewarding one for every user that comes across it.

Apple has introduced two most notable features in El Capitan, such as the new Windows-like window management system, allowing users to snap windows into place which ultimately leads to more productivity, obviously. The second feature being the introduction of some new gestures to help trigger actions without hunting for a button, again, a very handy feature.

There are small little gems littered all over the place, such as the new audio button in Safari, tab pinning, natural-language search throughout the OS etc., but overall, Apple has pushed for a more powerful and smoother user experience. According to Apple, OS X El Capitan is much faster than its predecessor, and well, it should be, but perhaps the most impressive update is the addition of Metal support, which lets developers make full use of the hardware El Capitan is running on to deliver the ultimate performance in gaming – just like how developers can on iOS. 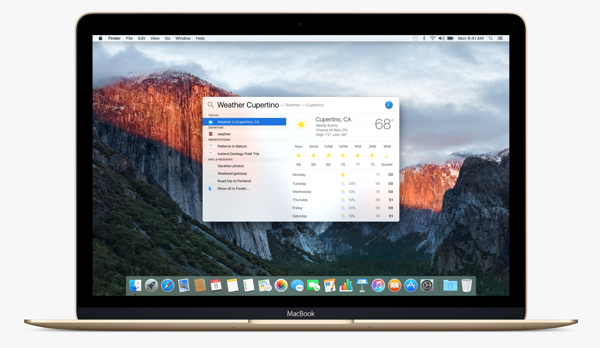 Apple has said that the new OS will be headed to consumers this fall, which means we can start placing our bets for October, if Apple’s last year’s schedule for Yosemite’s final release is anything to go by. Meanwhile, Apple is considering releasing a public beta of OS X El Capitan in July.

If you’re enrolled in the Apple Developer Program, then you can grab the first beta of OS X El Capitan right away. And remember, we suggest that you install it on a spare Mac, since it’s pre-release software, therefore things can be rough around the edges, so don’t expect the routine to go smoothly.

Not yet, at least.