Apple has made available to download macOS 10.13.1 beta 2, tvOS 11.1 beta 2 and watchOS 4.1 beta 2 with immediate effect. All second betas of the aforementioned platforms are available for compatible Mac, Apple Watch, and Apple TV devices.

The release of this second beta of the aforementioned platforms come approximately two weeks after Apple dropped the initial pre-release seed, which in itself followed approximately couple of weeks after the initial release of macOS 10.13, watchOS 4, and tvOS 11 to the general public after a prolonged period of internal and external testing. This latest release is yet another opportunity for developers to sink their teeth into any internal changes and to ensure that the respective platforms are ready for a public release. 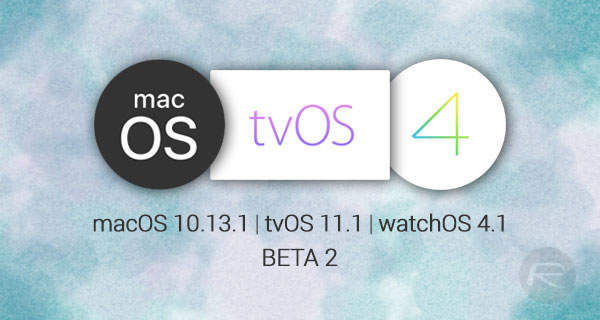 macOS 10.13.1 beta 2: Apple’s High Sierra platform is already considered a success thanks to the fact that it builds perfectly on the foundations put in place with macOS 10.12 Sierra. This latest point update is simply a continuous development version, ensuring that any security issues and critical bugs are fixed and eradicated from the platform.

As you would expect from a point update of this nature, it’s all about fixing what’s immediately wrong and getting a more stable version of the platform into the hands of users at the end of the day. Though it does include new emojis which are now also part of iOS 11.1.

Those with the necessary developer privileges can grab the latest update from the Updates section of the Mac App Store right now. If you’re new to developer betas, head over to developer.apple.com to get started.

tvOS 11.1 beta 2: tvOS 11 was definitely a welcome introduction for those who own Apple TV hardware. The introduction of automatic switching between light and dark modes, along with better background capabilities and notifications support for apps undeniably improved the overall experience. This latest release by Apple continues that development by putting right a number of the issues and niggles which have been identified since that original public launch. This should also hopefully give an improved experience on the latest Apple TV 4K box as well.

tvOS 11.1 beta 2 OTA update can be grabbed from the settings menu of Apple TV which has a configuration profile of tvOS beta already installed. If this is the first time you are downloading and installing the developer beta of tvOS, simply head over to developer.apple.com to get started

watchOS 4.1 beta 2: While all Apple Watch owners can download and install the watchOS 4.1 update, it’s pretty much aimed at those who have opted to purchase the latest Series 3 with LTE model. The update essentially unlocks the ability to stream music from their Apple Music Library or iCloud Library directly on the Watch. There’s also the introduction of a dedicated Radio app for more music streaming, along with new emoji support just like in iOS 11.1 and macOS 10.13.1.

Beta 2 of watchOS 4.1 is available from developer.apple.com to all registered developers in possession of an Apple Watch, with those same developers able to download the new update from the companion Watch app running on the connected iPhone with watchOS 4 beta configuration profile installed.