iOS 8.1.2 download is out! Apple has rolled out iOS 8.1.2 both as OTA and direct download via iTunes for supported iPhone, iPad and iPod touch devices. Changelog along with other details are as follows.

Even though iOS 8 is only two-and-a-bit months old, it has already seen a number of updates. The first, iOS 8.0.1, was a bit of a mess, leaving thousands of iPhone 6 users with the dreaded No Service warning in the top-left of the display along with a non-functional Touch ID.

iOS 8.0.2 followed shortly after, and iOS 8.1 then introduced Apple Pay. iOS 8.1.1 arrived with a number of security fixes, and for the most part, reports suggested that Apple was squarely focused on testing and preparing iOS 8.2. But when little bugs arise that simply cannot wait — iOS 8.2 isn’t expected to manifest itself until the new year — Apple tends to roll out small updates to fix lingering issues, as has once again been proved with the impromptu release of iOS 8.1.2.

But this, alone, isn’t too critical, and it would ordinarily take a little more than this to have Apple scrambling to make updates. Thus, among the spate of "bug fixes" mentioned in the change log, we’d hazard that some work has been done to amend security holes within the iOS software, although given that iOS 8.1.2 is hot off the press, we’ve yet to learn precisely what Apple has or hasn’t fixed. 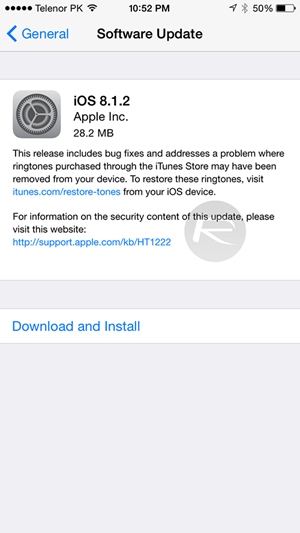 With iOS 8.2 well into its beta, that will be the next major software update to Apple’s mobile platform, although with Apple making a habit of dropping these go-between updates, we might be up to iOS 8.1.3 or even later on in the version count before the significant bump hits the download channels.