The release comes approximately a week after the release of the fifth developer and fourth public pre-release seeds for all of these platforms for the iPhone and iPad, Mac, Apple Watch, and the Apple TV 4. This means that all new major platform versions have now been in test since the original beta seed was pushed to developers immediately after the opening keynote of this year’s Worldwide Developers Conference in June. 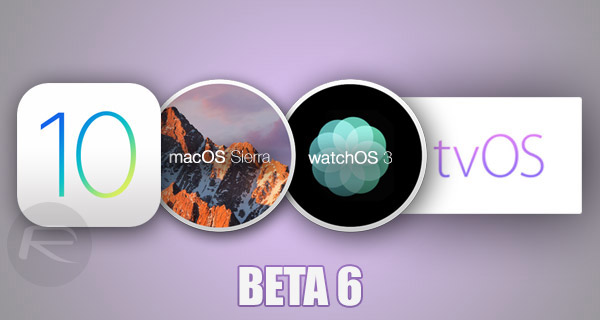 Out of all of Apple’s major software platforms, iOS 10 is likely to cause the most excitement with consumers. Not necessarily because it’s the most complex, but simply because it’s the underlying firmware that powers the iPhone and iPad, and because the iPhone 7 and iPhone 7 Plus will be the first new devices to ship with iOS 10 pre-installed in month’s time from now. It really won’t come as a surprise that this release (beta 6 for developers and public beta 5 for testers) contains the usual bug fixes and stability improvements necessary to get iOS 10 to a position where it’s ready for public consumption. It’s only a matter of weeks until we expect iOS 10 to go live, meaning that we don’t expect to see any major outward-facing feature additions in future betas.

As always, any registered developer or public beta testers with a previous beta of iOS 10 installed can grab the latest update via the Software Update mechanism within Settings > General > Software Update. Developers can also grab the firmware directly from Apple servers at developer.apple.com.

What was OS X, is now to be known as macOS going forward. And with that change comes a number of fantastic improvements and feature additions that will first become available when macOS Sierra goes live in the next few weeks. Owners of compatible iMacs and MacBooks will soon be able to enjoy and consume all of the improvements within macOS Sierra as a free-of-charge upgrade via the Mac App Store, but for the time being developer beta 6 and public beta 5 doesn’t contain any new outward-facing changes.

As we generally expect from a sixth beta, this release is all about stability and under-the-hood improvements that exist to try and get the platform ready for the final consumer release in the coming weeks and days. Developers and testers with an existing beta version of macOS Sierra can grab the latest update via the Mac App Store.

As we wait for a new Apple Watch release, we kind of have to console ourselves with the improvements made to watchOS that look to bring new functionality to the existing Apple Watch hardware. watchOS 3 is the biggest jump yet with this platform, and should be powerful enough to provide a fantastic experience on the existing Apple Watch, as well as any new hardware that is announced in the hopefully near future.

This latest beta release of watchOS doesn’t instantly contain any new feature additions or functionality upgrades. Rather, like the recent betas that have come before it, the release focuses on improving what is already there and getting watchOS 3 ready for installation on devices globally when it launches later this year. The update can be installed via the accompanying Watch iPhone app.

tvOS is undoubtedly one of Apple’s most exciting platforms. Not only because it powers hardware that is looking to reinvent our living rooms, but also because it’s a relatively new and immature platform that has a lot of room for expansion and growth going forward. Beta 6 contains the necessary changes and improvements to stabilize the platform and get it ready for a public launch, presumably next month, and also packs all the new changes and features that were discovered in beta 5.

As always, if any new additions or feature upgrades make themselves known in any of these releases, we will bring them to you immediately. Stay tuned.