It has been just over twelve months since the Motorola Xoom Android tablet was unveiled at the 2011 Consumer Electronics Show, making it the first tablet device to be sold with the Android 3.x Honeycomb operating system. The tablet supports up to 720p video playback with a 2 megapixel front facing camera for video calling, along with a 5 megapixel shooter at the rear which records video in 720p. 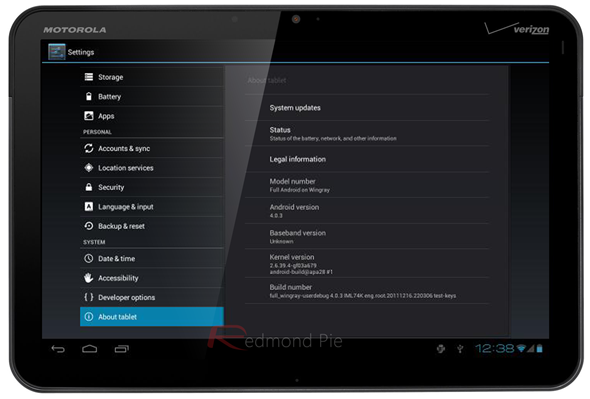 The impressive specification goes on with a multitude of hardware based sensors, including an accelerometer, gyroscope, magnetometer and a barometer. After Google made the decision to release the source code of Ice Cream Sandwich to AOSP, Motorola made a public announcement that they would update a number of their Android based devices to ICS, with the Xoom tablet being included in that list.

The Android community has had an inkling that something was coming from Motorola due to reports coming out at the turn of the new year that the company was planning an update for the said ‘Google Experience Device’ (GED). Few expected an update of this magnitude, but the company has released an Ice Cream Sandwich 4.0.3 update for owners of Wi-Fi-only Xoom tablet.

Ice Cream Sandwich has already started winging its way to the inboxes of Xoom owners who are members of the Motorola feedback group. Although it is an extremely positive move to see Google Experience Devices getting this update, hopefully the company will push the update to a wider range of Xoom devices in the near future.

If you are slightly annoyed that your Xoom hasn’t been selected to receive this update, then worry not as we have a quick how-to explanation courtesy of Talk Android below on how to update your device to the latest and greatest version of Android. It is very important to note, that in order to receive this update you must be running a stock Xoom tablet. If you have modified your device in anyway you will need to downgrade to build version HTK75D in order to proceed. The update is also only applicable to the U.S Wi-Fi Xoom.

Step 2: Store the downloaded .zip file on a flash drive paired with a host cable and apply through the stock recovery (if you need to now how to enter recovery on your device see below).

In order to enter recovery on the Xoom, reboot the device and after the Motorola logo has been displayed for approximately three seconds; press the volume down button. The Android recovery logo will appear in the top right hand corner, at this point press volume up to select it. Once booted into recovery the only thing you should see on screen is an Android logo. If you wish to dismiss this menu press the volume up and down buttons together.

If you performed the above mentioned steps correctly then you’ll boot into Android 4.0.3 Ice Cream Sandwich on your Motorola Xoom.