Donald Trump Continues To Use iPhone Despite Calling For Apple Boycott

Republican front-runner Donald Trump’s presidential campaign is being watched both by those living in the States and those outside it with equal parts amazement and bewilderment. The focus on him only intensified when he recently called for a boycott of Apple products after the Cupertino company decided to defy the courts and refuse to unlock an iPhone 5c belonging to one of the San Bernardino shooters.

A matter of weeks ago, just as the whole Apple-FBI debacle was getting into top gear, Donald Trump set his stall out early by siding with law enforcement and subsequently chastising Apple for not playing ball. It seems Trump got carried away, though, because in the midst of it all, he called for a boycott of Apple’s products until the company did what the FBI was asking of it.

The leading GOP candidate then continued to tweet from his iPhone, and when the media pointed out the irony, he tweeted out the following.

I use both iPhone & Samsung. If Apple doesn’t give info to authorities on the terrorists I’ll only be using Samsung until they give info.

Hopefully others will follow suit. Our country needs & should demand security. It is time to get tough & be smart!

So no iPhone for Donald Trump, it would seem. 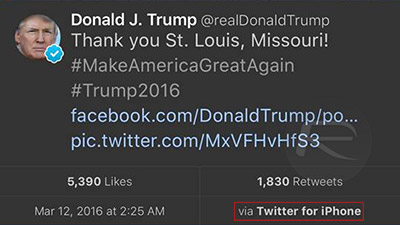 Today, Donald Trump has been tweeting up a storm, generally making little sense and being obnoxious. In the process of doing all that, though, Trump has outed himself as a continued iPhone user, despite his claims for a boycott. The tweets coming out today have all been from an iPhone, meaning that the boycott didn’t last all that long at all. Ok it’s possible that these tweets were sent by a member of Trump’s team rather than the man himself, but still, a boycott is a boycott. And this looks nothing like a boycott. 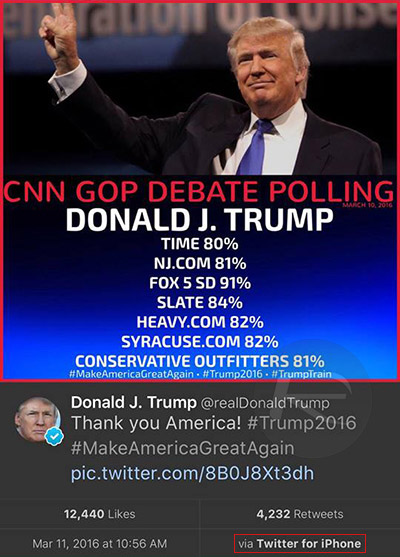 Donald Trump has been outspoken about his stance on the FBI’s request to have that iPhone unlocked, and with Apple TEO Tim Cook digging his heels in, expect to see more of what both Apple and Trump have to say on the matter.

Watch Trump calling for an Apple boycott in the video below.