If you’re the type of individual who want their music under control at a party then the chances are high that Algoriddim are on your radar. Their vjay and djay apps for the iPhone and iPad have gone down with a storm with audio and video mashup loving individuals, but when you’re at the top of your game, and the fire is hot, there’s always room for an additional release. Algoriddim have today pounced on that fire by introducing djay 2 for iOS , and take it from us – it’s hot.

djay 2 is an evolution of the already existing app that was teased a few weeks back, and that has proven so successful on the iPhone and iPad amongst music lovers all over the world. Like its predecessor, the second iteration of the app contains pretty much everything that an individual needs to be a top drawer DJ. That’s not to say that the original release was lacking, but djay 2 makes the whole process that little bit easier by introducing high-definition waveforms, a sampler, a beat grid and an all new and revamped music library setup. 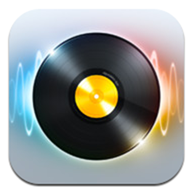 As you would expect, djay 2 features pretty seamless integration with the existing music library on the device being used (as long as the music is directly stored on the device rather than in iCloud through iTunes Match). Advanced settings allow the user to start mixing up samples on-the-go or flick Automix on to let the software create and play back a seamless musical mashup.

Algoriddim has clearly tried their very best to mix old with new. The technology and stunning Retina display of the iPad and iPhone has been used to seamlessly blend with the traditional visuals of a DJ’s turntable, and the results are amazing. An additional HD waveform layer has been added over the top of the turntable setup that provides the user with almost clinical access to the mix that they are creating. Spectral timelines, colored waveforms and almost perfect synchronization – it’s all there at your fingertips.

Like a lot of other apps of this nature (including the original djay and Pod2g’s podDJ), the included power and feature set is something that not many users will explore to their full potential. Hardcore music lovers and DJ enthusiasts will love djay 2, but there’s also a lot of mileage in the app for those who are keen to explore the world of music sample directly from their iOS device.

Also, djay 2 for iPhone and iPad is at a special launch price, and will cost just $0.99. Grab it now before the regular price takes over!

(Download: djay 2 for iPhone and iPad on the iOS App Store)