Following on from earlier reports that Apple, among a string of other companies, was planning on opening up a store on location at New York’s upcoming World Trade Center Mall, it has now been all-but confirmed by independent reports that this will indeed be the case.

Apple has, during the past few years, gradually expanded its reach of brick-and-mortar Retail Stores, with several countries having recently gotten their very first physical Apple Retail outlet. But the World Trade Center Mall, which will serve as the center-fold of the NYC shopping scene, looks a prime opportunity for the Cupertino to further engage with consumers in the thriving U.S. market, and hence, it’s not too surprising that Apple will be setting up camp there in 2015.

TheRealDeal’s new report (via 9to5Mac) on the matter corroborates an earlier piece from the New York Post, which mentioned that Apple, along with several other big-named brands including Mont Blanc and Hugo Boss would be looking to capitalize on this prime spot for shoppers.

Despite some grievances with the supposedly restrictive way in which the unorthodox piece of architecture has been designed, Apple is said to have secured a lease on a store to open up and begin selling iGadgets from next year. According to a source, Apple and several other big names pushed for design changes on how the stores were affected by the large columns (depicted), which they felt would hinder effectiveness of advertising and brand identity.

But despite not getting its way, Apple is still thought to be pressing ahead in its mission to open what will surely be among its flagship stores in the world, much less the United States.

TheRealDeal also divulges a few specifics on where precisely Apple’s plot will be situated within the vast construction. As you can see from the leaked map, the Apple Store will be based centrally, on the lower level of the mall, where it will serve customers alongside the likes of Disney and Swarovski. 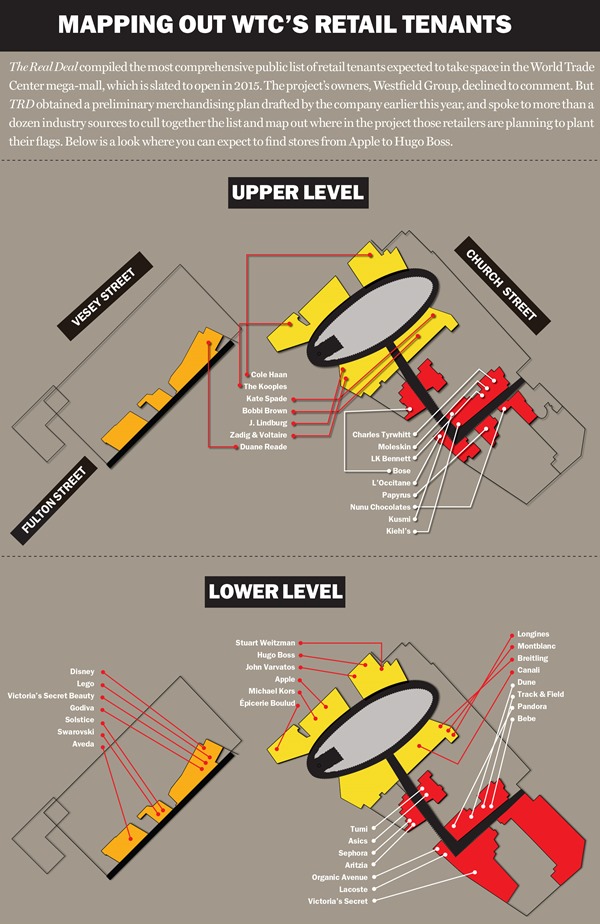 Shopping center giant Westfield, which has malls popping up all over the world right now, is once again manning the fort. The Australian firm is touting the NY WTC Mall as "the most complete retail destination in New York City, " and if you check the concept clip below, it’s hard to argue with this assessment.