For owners of older iOS devices running Apple’s A4 processor; that good news came on Tuesday, 27th December, with the release of the iOS 5.0.1 untethered jailbreak, dubbed ‘Corona’. But whilst the A4 owners were enjoying their belated Christmas present, the owners of devices running Apple’s new dual-core A5 powerhouse had to look on in envy. If you have been an iPad 2 owner since launch, then you will no doubt remember that, thanks to JailbreakMe 3.0, an untethered jailbreak was possible on iOS 4.3.3, but that’s where the freedom ended.

But as the old saying goes, "All good things come to those who wait", and the waiting has paid off as the anticipated iOS 5.0 / 5.0.1 untethered jailbreak for A5-powered devices is eventually upon us. As expected, the jailbreak will provide all of the untethered goodness we have come to expect on the iPhone 4S and iPad 2, so be prepared for long delays in Cydia due to the increased server load.

One likely result of this jailbreak, and something I am personally looking forward to is the influx of tweaks we are bound to see in the coming weeks and months which hook directly into, and extend the functionality of the intelligent voice assistant, Siri. Thanks to SiriProxy in the past, we’ve come to see some amazing feats being performed by Siri, but lets just consider that a thing of the past thanks to today’s amazing untethered jailbreak release for the iPhone 4S and the mighty iPad 2.

You can see our tutorial on how to jailbreak your iPhone 4S or iPad 2 using the Absinthe tool by the Chronic Dev Team, the rest of this article will feature of the new Command Line Interface (CLI) tool which has been supplied by the iPhone Dev Team for debugging and diagnosing issues if anything goes wrong. The CLI tool can also execute the full jailbreak process if required, but with twenty options built-in, it acts a powerful troubleshooting utility. 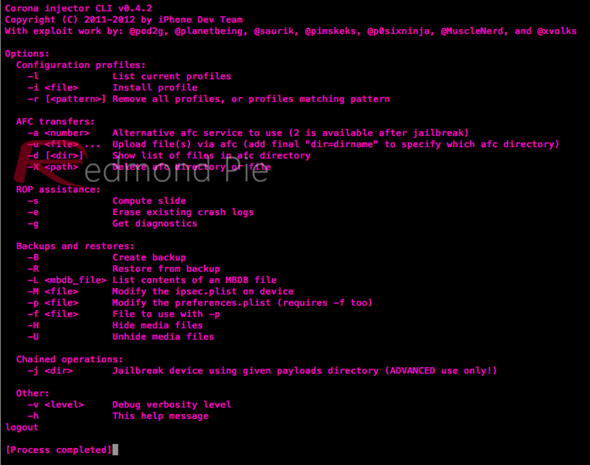 The OS X version of the iPhone Dev Command Line Tool can be downloaded from the link posted at the end, with the corresponding readme information also being available; which outlines the options available to debuggers and tinkerers. If you intend on using the iPhone Dev CLI then make sure that you are familiar with the risks involved and follow all advice from the authors.

If you have viewed the included documentation, you will be able to see a number of options available, and the increasing complexities of the more advanced options, users would benefit from having some previous command line experience. The CLI tool is generally intended to be used for debugging purposes and could cause problems if used without any proper knowledge. The documentation provided, although only one page, provides a number of example usages for the CLI.