The developers of the Dash package obviously have their own opinion about how Apple has chosen to implement multitasking within iOS. The introduction of iOS 4 brought with it the ability to send apps in the background that allows users to quickly invoke them from memory if the need arises, therefore offering a nice new multitasking-type feature to all iOS users. However, as great as the system and idea is, there has been a lot of complaints about the rather mundane way which Apple has chosen to go about adding to the the firmware bundles.

Dash is one of the many packages for jailbroken devices that attempts to breathe some fresh air into the way apps are handled in the background by totally changing not only the visuals and way the apps are shown to the user, but also the way they are handled and interacted with. In a native installation of iOS, backgrounded apps are viewed with a double press of the home button, which in turn invokes a switcher bar along the bottom of the device’s screen that shows four icons at a time in a horizontal scrolling view through which the user can flick through to see other apps. Tapping on an icon launches that app into the foreground. 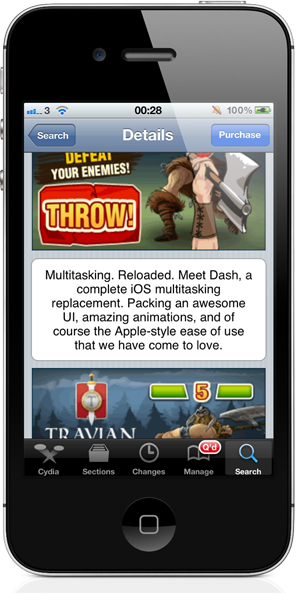 Dash aims to change that horizontal bar at the bottom by hooking into the multitasking system of iOS and making everything larger than life and appear in full-screen mode, utilizing the full display of the device. The main form of interaction is still scrolling through the running apps, but each app gets its own view that shows a snapshot of the app itself as it was last seen before being sent to the background. The interface of the package is simple but notable and definitely brings an extra element to switching between running apps. The added animations that occur between each swipe is also something that will appeal to users.

Dash is definitely a slight improvement on the standard Apple way of handling backgrounded apps, but when so many others have done this before and probably slightly better in some cases like MissionBoard, it’s debatable whether it is worth paying $1.99 for it or not. 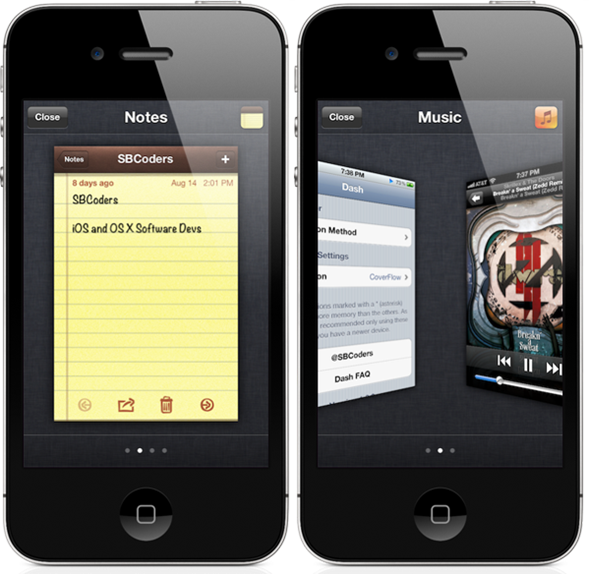 Dash is available to download from the ModMyi repository for $1.99 with no specific iOS version requirements being given.