Today’s smartphones are arguably the best portable media players in the market, beating at times even dedicated offerings from renowned manufacturers. Don’t believe me? Pitch the iPhone 5’s audio chip with decent earphones against anything that the competition might offer, or bring in the HTC Sensation series with its Beats Audio offering for some really heavyweight competition. With powerful hardware and capable software to go along with it, mobile phones provide massive digital music libraries that we can carry around anywhere with little or no hassle.

A good hardware deserves to be complemented with adequately matching software, and our case in study is no exception. While Google Play Store has no shortage of really wonderful music players – both free and paid – from even the biggest names in the industry, there’s something about Apollo that makes it all the more appealing. Perhaps it was the fact that the Holo-themed player enjoyed exclusivity to CyanogenMod 9 and 10 for quite a while before the developer decided to make it available for all through Play Store, or that the player itself is very customizable, sufficiently feature-laden, simple and easy to use, and following the trend with most CM apps, is theme-able. Not satisfied with even this much? It has more to offer in the paid version, Apollo+. 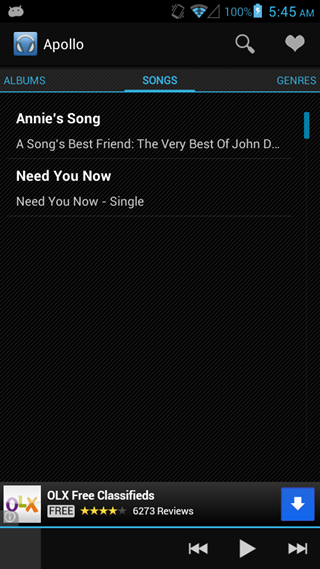 Since Apollo is Holo-themed, you get side-swiping panes for Artist, Album, Favorites, Songs, Genres etc. Shortcuts to any individual items can be pinned to your home screen. There’s a search function that allows looking up for tracks, artists et al using both typed as well as voice commands. Individual songs can be marked as favorites too, for quicker access, or creating a quick playlist. The Now Playing section occupies a small horizontal bar at the lower edge of the screen, and a new page for such is opened only when the bar is tapped, and not upon track selection. Apollo supports drag and drop actions throughout the app. 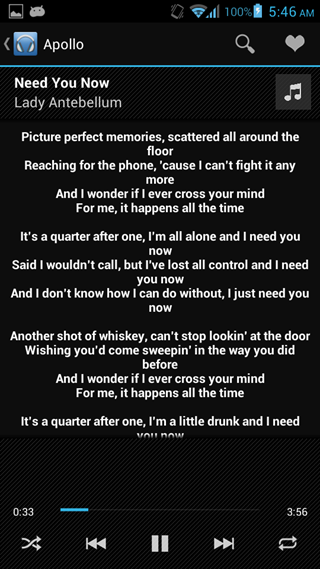 Depending on the correctness of your music’s metadata, Apollo can fetch lyrics from the internet. It’s also supposed to cache album art, although that bit didn’t work for me. Playback controls are pretty standard, too, coming with equalizer support (works best if you’re on an AOSP ROM with DSP Manager). Other configuration parameters are pretty standard, too. Apollo supports themes, and while the actual package comes with only one theme, you can grab more from the Play Store from within the theme chooser interface. 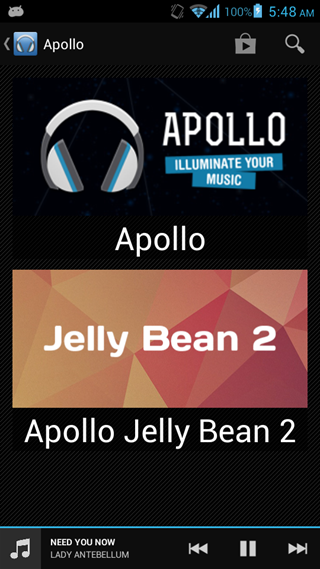 In all fairness, Apollo is a pretty good music player, but most people are likely to use it just to get a taste of CM 10 goodness on other Android firmware. Not saying that it lacks anywhere, and the Holo interface is definitely always welcome, but there’s little more to it for now. The developer promises a plethora of “coming-soon” features, including the likes of tablet support, sleep timer, Google Dream support, Last.Fm scrobbler etc., just to name a few, so, it’s definitely a prospective candidate you want to keep an eye out for. In the end, since Apollo’s free version won’t cost you anything to try, give it a shot yourself and make an informed decision.