Could Google’s New Chrome Android Mascot Be Indicative Of A New Project? [IMAGE]

Google’s has always had a rather funny and intriguing way of announcing new Android versions, coupling the news with the installation of a new Android statue at their campus. We’d seen these sculptures being erected for Froyo, then Gingerbread, Honeycomb, for Ice Cream Sandwich, and then Jelly Bean. Thus, it was no surprise when people went crazy over a certain Google+ post from Google’s Android community manager, Paul Wilcox, that indicated a new statue having been installed at the company’s official campus!

It was no ordinary statue, either (photo just past the text); this one Bugdroid (the official mascot) seems to have been fashioned out of pure Chrome, is massive to look at, and has been installed at building 45 of the Google’s Mountain View, CA. campus. The update from Paul Wilcox on his Google+ page offered this caption:

“A new version of Android has been released!
(In statue form) :-D” 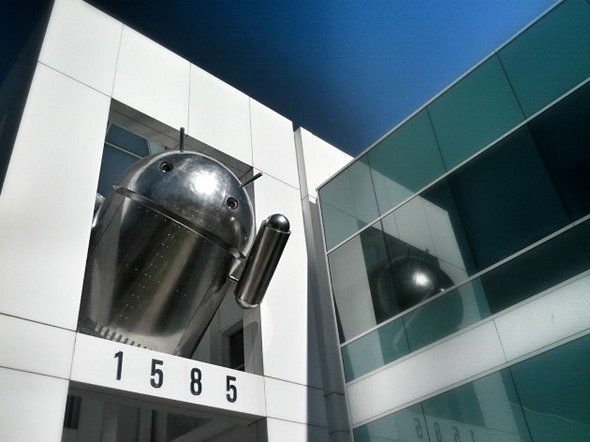 The installation of this new statue instilled a lot of interest in the Android community, exciting fanboys across the blogosphere and the web as a possible indication of a new Android version release. However, Wilcox was quick to shoot down any such rumors, saying that his post was

In all fairness, Google may have disrupted its usual relative pattern with new Android version releases and installation of statues, but this doesn’t curb all the speculation that’s been going around. For one, it’s an all chromium statue, so, could that mean that the Mountain View company is finally deciding to merge the Chromium OS and Android line ups into one single coding release? Seems unlikely, but it’d sure be interesting if a comprehensive operating system were actually available for both your computing and smartphone needs.

Another factor to take in is the timing. While Google may not have had a pattern of Android releases in January, we do know that the last Android 4.2 Jelly Bean update was an incremental one, and doesn’t really account to a completely new version by Android standards. That said, the company has chosen to install this new Chrome Bugdroid on building 45 of the campus, while traditional Android-version statues had been placed in the ground in front of building 44. Could this change in pattern be indicative of a new initiative that the search giant in undertaking. We may not know yet, but you can sure rely on us to bring you the latest news as and when it happens.