There is nothing more frustrating to owners of consumer electronics, such as phones and tablets, than a smashed screen. For this effect, American glass manufacturer Corning introduced its super-tough Gorilla Glass, hard-to-break glass designed with consumer devices in mind.

At this year’s Consumer Electronic Show, the company unveiled the new generation of Gorilla Glass, dubbed Gorilla Glass 3, which is allegedly the toughest glass around. At the official demo, Gorilla performed crush and bend tests on a number of “tough” glass boards, as well as a gravity test: dropping a 130 gram ball from a height and assessing the damage. As you can tell from the video, Gorilla Glass 3 fared well compared to its competitors, as well as an aluminum board. 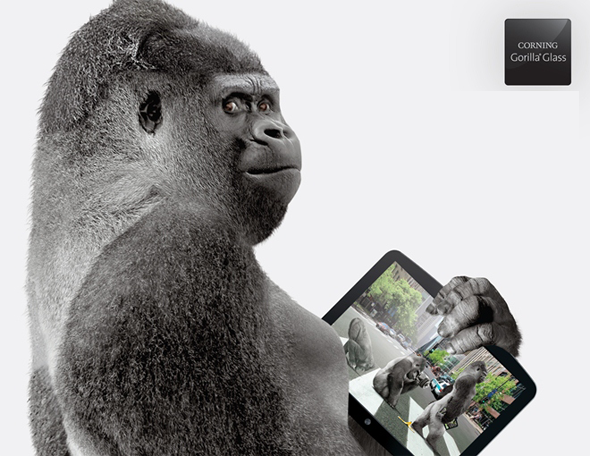 In a press release, Wendell P. Weeks, Chairman and Chief Executive Officer of Corning, pointed out the applications that this product has in the consumer world:

“This year at CES, Corning will demonstrate its industry leadership in specialty glass and fiber optic technologies with the introduction of two products designed to enhance and extend the capabilities of consumers’ favorite devices,”

The Gorilla Glass is manufactured at Corning’s plants in Harrodsburg, Kentucky, USA, Shizuoka (Japan) and Taiwan, using high-temperatures and molten potassium salt, where smaller sodium ions from the glass are replaced with larger potassium ions, which occupy more space and are therefore compressed closer together, making the surface much tougher. This form of glass is then used on smartphones, portable media players, laptops, tablets and other consumer electronics that are designed to be portable and highly resistant. Some manufacturers plan on bringing Gorilla Glass to devices outside of the consumer electronics space due to its toughness and durability.

Held every January in Las Vegas, the Consumer Electronic Show is a week-long event where major manufacturers of consumer devices show off their plans for the new year. This year, we’ve seen everything from new portable game consoles to new models of tablet computers. While many of these products are conceptual in stage, several actually manage to hit the shelves.

Corning plans to ramp up production of Gorilla Glass at the end of Q1 of this year. The first consumer electronics to include these new screens should begin hitting shelves in the first half of this year.