Android Lollipop is all the rage right now and the OS has not arrived on devices other than the Nexus 6 and Nexus 9 as of yet. The wait and anticipation of the arrival of a magical update from manufacturers such as Samsung is producing more excitement every day. We now have a video that shows of the Samsung Galaxy S4 running Android 5.0 Lollipop, being compared to a similar device, but running Android 4.4.2 KitKat.

The Galaxy S4 was seen running Samsung’s Lollipop based test build just a few days back, and almost a week later after we saw the second Lollipop test build running on a Galaxy S5. Where the S5 was guaranteed to receive the coveted update, the S4 update is bigger than many might have anticipated. 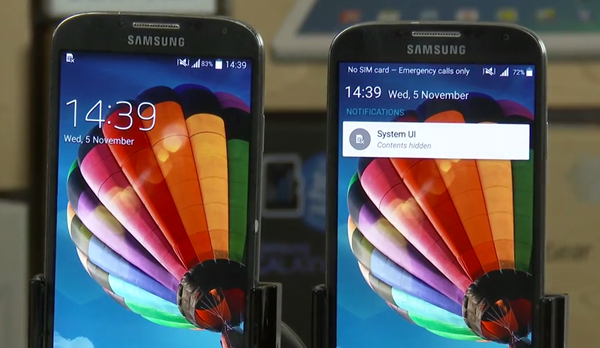 The S4 – barring the features found on S5 – will be receiving a design overhaul similar to the latter, bringing the predecessor at par with the successor in terms of UI at least. The S4 will be getting the same TouchWiz launcher and UI that we saw in the Lollipop leaks for the S5. The black menus are gone and have been replaced with a more Material Design centric white theme, with Samsung completely changing the design of the Messages app for one.

The way you interact with the interface for things as simple as changing wallpapers or adding widgets to your home screen has been revamped as well and is nothing like the boring prompts and menus you found in earlier versions of TouchWiz.

As was the case with our news earlier about SamMobile showing of a leaked release of Lollipop on the S5, Android 5.0 Lollipop does seem faster on not just the S5, but the S4 as well. I get that both phones have impressive specs but it is clear that improved software has helped the case here.

Lollipop will not be hitting devices as old as the popular Galaxy S2, but citing an improved line of code and features in Lollipop, it will be exciting to see Lollipop running on such older devices and even more, the improvements in performance. Hopefully custom ROMs will do the trick.

As for the updates on Samsung devices, it is believed the Korean giant will be rolling out the Lollipop update to the S5 in late November or early December, soon followed by the S4.

We will be brining you all the latest Lollipop developments coming in from the manufacturer, so stay tuned.