Apple’s Senior Vice President of Software, Craig Federighi, has simultaneously thanked an iPhone owner for being an Apple customer, and managed to shoot down a popular myth about the iPhone multitasking and associated battery life. There’s long been a popular myth that opening up the iOS app switcher and killing background apps would preserve battery life on the device. An email chain that was originally fired off to Tim Cook regarding that subject, shows Federighi intervening and taking the opportunity to respond and debunk that claim with a very blunt, and to the point, “no”.

If you’re one of those iPhone or iPad owners who suffers from battery depletion at an accelerated rate, then the chances are that you have gone through every process recommended on the Internet to try and hold onto every single drop of power possible. One off the most popular suggestions, which appears to be drawn from fiction rather than any empirical research, advises owners to kill all apps from the app switcher, which is also known as multitasking tray. The theory here is that those apps, although inactive, are still consuming memory and power resources to remain in the background. One iPhone owner by the name of Caleb wanted to query that with CEO Tim Cook, and 9to5Mac has managed to obtain a copy of that email. 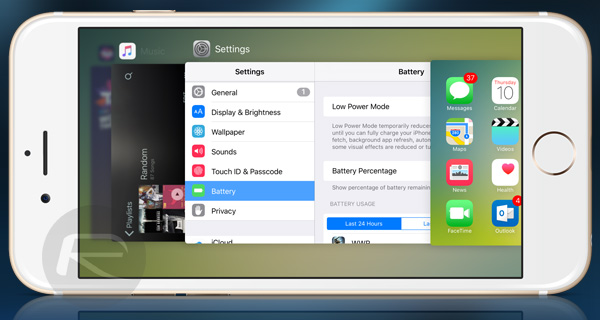 The original email, which was sent to Tim Cook on the evening of March 6 2016, asks if the CEO of the Cupertino-based company personally quits apps from the iOS app switcher on his iPhone on a regular basis. And if so, is this because it is necessary for the preservation of battery life? Caleb signs the email off with the proclamation that he’s rooting for Apple in its encryption case against the FBI.

He didn’t get the reply that he would have wanted from Apple’s enigmatic Tim Cook, but he did get one from one of Apple’s high-ranking executives, Craig Federighi.

Apple’s Senior Vice President of Software didn’t want to leave any uncertainty around his retort, simply choosing to answer the question of “Do you quit your iOS multitasking apps frequently, and is this necessary for battery life?” with a straight to the point “No and No”. He does append the answer with a little cheeky smiley face, and thanked Caleb “for being an Apple customer”. 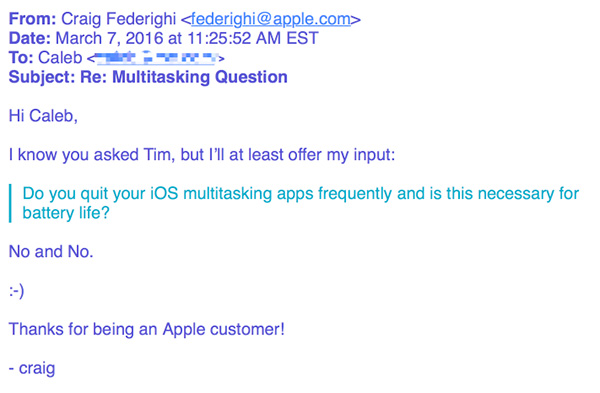 So there you have it folks, direct from the horse’s mouth so to speak. Official Apple confirmation that killing apps from the iOS app switcher does not offer any battery benefits at all.