Google’s dominance in the internet and technology world is beyond question, as the Mountain View company has released a myriad of products and introduced platforms that have left biting a lot of competition in the dust. The Chrome browser is one of the most popular – if not the most – internet browsers in existence today, and Google’s customer base in terms of its applications and productivity suites continues to grow. Today, Google takes another step forward, making available in Chrome App Launcher for all users of Windows 8 and Windows 7 operating systems.

The launcher is basically a part of Google’s Chrome OS, and was available for Windows users as a developer preview earlier. It’s supposed to provide quick and easy access to any and all Google Apps that you might be using, by putting a button for the launcher in the taskbar and the Start page for Windows 7 and Windows 8, respectively. Pulling the Launcher up lists Google Drive, Gmail, YouTube, and the Chrome Store, along with having a search bar to complete the package.

Along side the default options, you may add any other Google-Chrome compatible apps to the Launcher to make it suit your needs better. All the supported apps are basically HTML5-based desktop application packages, and while on the surface, they are unlike Chrome in any way, the underlying engine that is being utilized is still the Chrome browser.

At this point, one limitation remains that you cannot basically search for apps through the launcher itself – you will have to navigate to the app directly on the Chrome Web Store and install it there. A glitch, we know, but one that Google would most probably quickly fix. 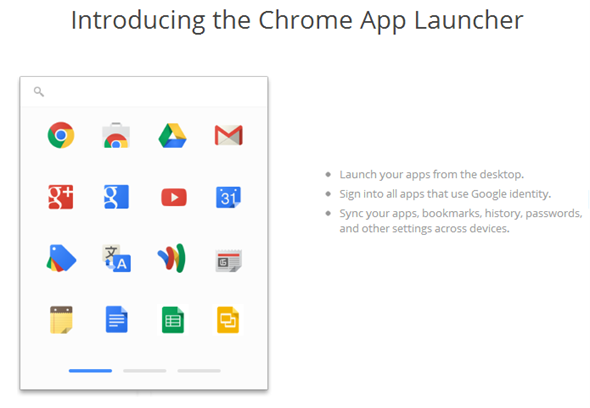 Installing the launcher is as easy as navigating to the link provided below and hitting the Get the launcher button. The app will be available on your desktop at all times, making accessibility a non-issue altogether.

Google’s Chrome App Launcher is currently available for Windows only, while reportedly, versions for OS X and Linux are under development. We urge you to give it a try, as it’s quite wonderful and should you rely on Google Apps a lot, you’ll love it for sure.