Microsoft is seeking to spread a little pre-Christmas cheer by offering users of its SkyDrive online storage service something extra this holiday season. If users stake their claim before the end of January, they will be treated to a whole 20GB of extra cloud storage, free of charge.

SkyDrive has become increasingly important to Microsoft as it starts to tie the service into its products more tightly. Changes brought about by Windows 8.1 make SkyDrive more central to how people work, and those picking up Surface 2 or Surface Pro 2 tablets are receiving a massive 200GB allowance as a sweetener.

Microsoft obviously isn’t the only company offering free online storage, and both Google and Dropbox are already duking it out to provide a place for us to keep all our stuff online. Dropbox is possibly the most tightly integrated into third-party applications, especially on mobile, but Google Drive is also proving popular, amongst those with Android phones particularly. 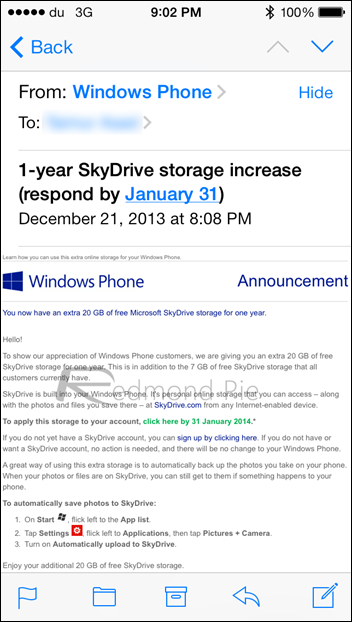 As is always the case with these free storage offers, the space is only available on a temporary basis. SkyDrive users who take advantage of the offer will see their 20GB removed after twelve months, though they will then be able to pay should they still require the extra breathing room for their online storage needs.

Offering free storage boosts is nothing new in the industry. Dropbox famously signed deals with the likes of HTC and Samsung which saw buyers of new smartphones receive anything up to 50GB of free additional storage space completely free. The hope is obviously that once we’ve all uploaded our data and that free storage offer expires, we’ll have to pay to upgrade from the basic free plan.

And it works. As we all become increasingly reliant on having all of our data online and accessible all of the time, services like SkyDrive, Google Drive, Dropbox and others will only see their stock rise amongst tech geeks and ‘normals’ alike.

If you’re a SkyDrive user you should be receiving an email offering the free 20GB of storage soon, assuming it’s not already sat in your inbox, that is.

Do you think twelve months of free storage is more than enough to entice users into using SkyDrive? Be sure to share your thoughts with us in the comments section below.