Chinese search engine giant Baidu has announced their own mobile operating system today. It is called Baidu Yi OS and it is based on Android.

For those unaware, Baidu is a web services company based in China. Baidu is, in a lot of ways, China’s equivalent of Google. Their largest product is their search engine which holds approximately 80% of the Chinese market. The company also has a web browser and have today announced their own mobile operating system.

The news comes from Baidu World in Beijing – an annual event hosted by Baidu – where Yi OS was announced. It is based on Google’s Android operating system, which means it has the same basic feature-set with Baidu-flavored customizations added on top. And quite surprisingly, the first rumor regarding Baidu working on a mobile OS was first broken in June this year.

Apps like Google Maps, Music, Places, Search will be replaced by Baidu’s own solutions. The OS will come with deep cloud integration for storage and backups which will certainly go a long way in helping Yi OS compete with Microsoft’s SkyDrive and Apple’s iCloud cloud services. 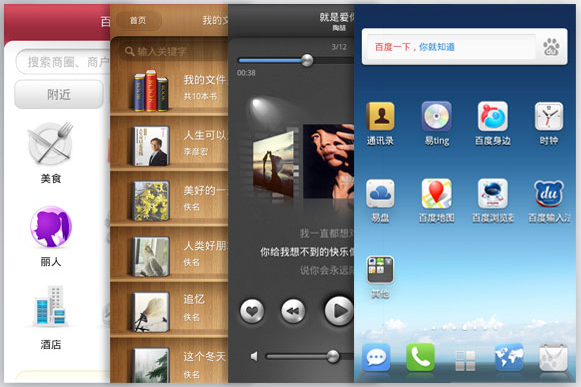 As it builds upon Google’s Android OS, it’ll have all the same core features, such as integrated voice search. But of course Baidu also has lots of its own apps ready for Baidu Yi – there’ll be Maps, Yue (a reader app), Shen Bian (like Google Places), and Ting (its music app).

Yi OS looks a like a potent mix of MIUI and stock Android to us. Since MIUI’s looks are inspired by iOS itself, it’s just another way of saying this looks a lot like iOS. From the dock at the bottom, to the rounded square icon design, this is iOS-inspired through and through – which isn’t necessarily a bad thing.

Baidu seems to be fine with creating products inspired by other popular products in the same category, as it was proved when they released the Internet Explorer-based Baidu Browser which looked uncannily similar to Google Chrome.

Because of China’s population and Baidu’s popularity, Yi OS poses a big threat to iOS, Nokia, Windows Phone 7 and Android, at least in China itself. Competition is always good, so other platforms will definitely have to step up their game to ensure Baidu doesn’t end up dominating the smartphone industry, like they dominate Search in China.

No release date has been given for when we will see the first Yi OS-powered smartphone. We are also a bit unclear over whether this will support all Android apps or will it have its own separate app store apart from the Android Market.

Still, if you’re in China, we highly suggest waiting for that MIUI-based Xiaomi M1 to launch. We wish it were released outside China, as it will be the most powerful Android smartphone when it releases for the unbelievable price of $310.

Head over to Yi OS’ official page to learn more.