Music is big business. I wanted to start this article of with something very ‘matter of fact’, so there it is. There is no getting away from the fact that music is a huge industry, popular all over the globe. When I talk about the music industry though, I don’t just necessarily mean the production or the sale of music singles or albums. The popularity of personal music players, music software and things like headphones has skyrocketed in recent years and become a multi billion dollar industry.

For the last decade, Apple has become synonymous with the change we have seen in music sales. The release of the iPod and the iTunes music store revolutionized the way the world consumed and stored audio, making Apple an immediate big player in the industry. For the last ten years the company has produced various versions of its popular iPod device along with the Apple iPhone and iPad all being shipped with built in music and media applications. The point I am trying to make is that Apple reinvented themselves and rose from the ashes primarily on the back of music, and whilst they are now big hitters across many markets their devices will always have a musical pedigree.

With that in mind, two enterprising developers in the jailbreak community have released a tweak which offers an interesting take on media playback on iOS devices. Developers dj_kira and Mikiwi93 have released ‘HomePlayer’ which takes its name from not only its location, but also its function as it is essentially a media player which lives on the devices home screen. Through the use of a user defined Activator gesture, a new media player screen can be invoked which allows music playback with all of the features you would expect to see from a functional music playback service. 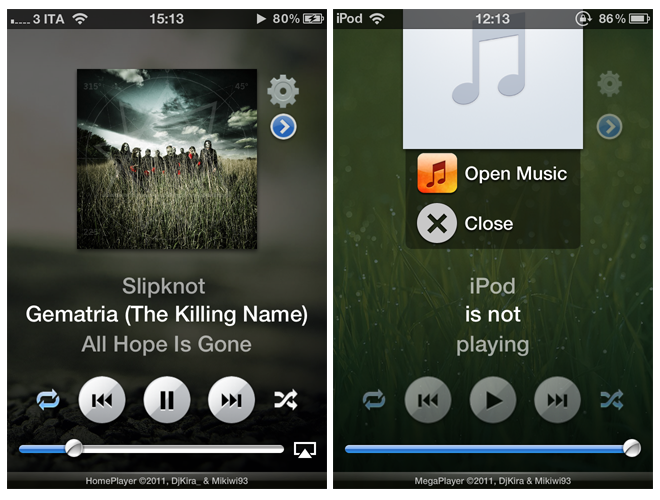 As part of the new ‘HomePlayer’ screen, the user will have the standard music controls to pause and stop music as well as adjust volume. HomePlayer will also display track information which includes the album and artist name if this info is available and if you press the blue arrow which appears in the view you can even view the lyrics which accompany the currently playing song. Obviously the lyrical playback is dependent on the track having the words embedded in them, which if it does not the tweak can search online for the lyrics if you require. 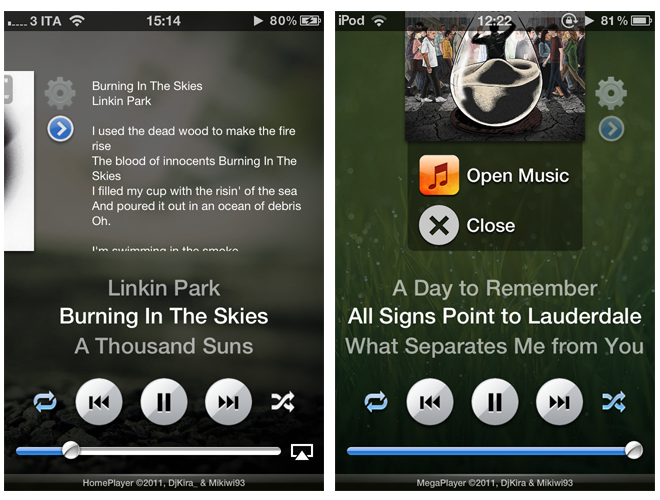 HomePlayer is a nice idea and does contain some interesting and useful features. But at a cost of $1.99, I am not sure if it offers enough benefits over the default music player, or even the latest Shazam media player to warrant the price tag. The lyrics playback is a nice touch, but it seems as if you would be paying for the ability to invoke the player via Activator and for the convenience of not having to leave your Springboard.

HomePlayer requires iOS 4 or higher, and is available at a cost of $1.99 from the ModMyi repository in Cydia.