For months, smartphone users worldwide have been eagerly awaiting the release of the Galaxy S4, Samsung’s newest smartphone. If you are planning on using AT&T, you can now pre-order Galaxy S4 through the network and be one of the first to get their hands on it.

The device is now available from AT&T’s website in both the White Frost and Black Mist color models. Both models are available for $199.99, with a 2-year contract, $449.99 with a one-year contract or without a contract at all, for the full price of $639.99, which might be a little steep for some. The pricing structure was clearly done to entice users to sign up for a longer contract and stay on the network for a longer period of time, with users opting for a one-year agreement or no contract at all being severely penalized. Unfortunately, this seems to be a common practice among phone carriers, which are being faced with increased competition.

The new handset, announced last month, is Samsung’s new smartphone, replacing the widely successful Galaxy S III. While the device features few design changes when compared to its predecessor, except for a larger screen and a slightly thinner shell, it includes vastly improved internal hardware. Performance boosts include a 1.9 GHz quad-core Qualcomm Snapdragon processor, 2GB of RAM and a 2,600mAh battery which will deliver an extended battery life. The Galaxy S4 also includes a 13-megapixel rear-facing camera, which Samsung claims will be cable to take pictures of comparable quality of many point and shoot cameras available on the market today. 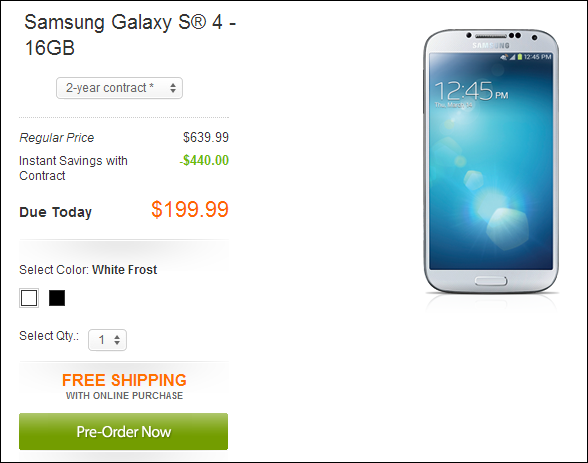 The new smartphone, which was first announced last month, has sparked interest from industry leaders, enthusiasts and prospective smartphone users alike. Many have already committed to buy the smartphone once it finally becomes available on May 3rd. If you are looking to get it on a contract, for a reduced upfront price, AT&T may be a way to go. Better yet, the device will begin shipping on April 30th, meaning that there will be a chance for it to start reaching customers earlier than the May 3rd wide release date.

What do you think? Are you getting the new Galaxy S4 once it is released? Let us know in the comments below, we love to hear your opinions!