Although we love our smartphones, tablets, notebooks and common gadgets here at Redmond Pie, we do occasionally like to feature some out-of-the-ordinary toys for no other reason than sheer coolness. The AR. Drone 2.0 Power Edition is exactly that, and with a price of eighty bucks more than the standard version, you get quite a bit more bang – or should we say, blade – for your buck.

At $379, the Power Edition of the model Drone is a considerable chunk of wad, but when you consider that the Prestige Edition of Call of Duty: Ghosts will set you back over one hundred dollars more than the standard version of the upcoming title, the AR. Drone suddenly seems a bit of a snip. 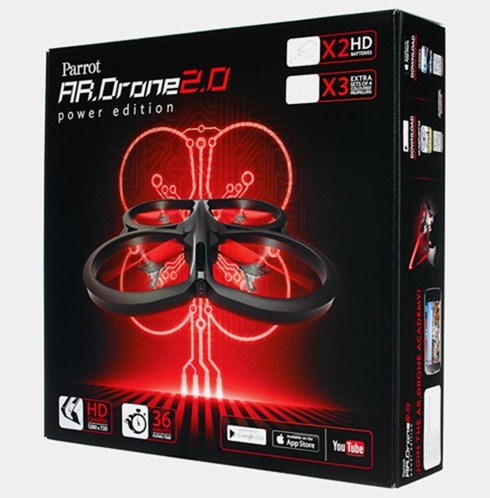 The Power Edition is stocked with not one, but two high-density, 1,500 mAh batteries, which will collectively keep your Drone airborne for a full 36 minutes. With a flight recorder boasting 4GB of on-board storage, you can use your drone to really go exploring, and since the Director Mode allows you to tweak video and imagery right from your iPhone, we’d go as far to say that this is one of the coolest toys currently known to man.

Although the Director Mode version of the app currently only exists for iPhone, makers Parrot state on the AR. Drone 2.0’s webpage that a version for the Google Play Store is incoming, and should land in the very near future.

The price, I’m sure, will put many of you off, but if you’re a fan of drones and would like one of your very own, this is as close as you’re likely to get. If anything, the Power Edition’s added extras render it a worthwhile purchase over the standard version, and with 36 minutes in between charges, you can have a great deal of fun playing with it.

As a grown man, it’s the kind of thing I would loved to have had as a child, but even now, I’m seriously contemplating grabbing the Power Edition. Just make sure, if you do get your hands on an A.R. Drone 2.0, you don’t go scaring people with it!

If you are indeed interested in buying the AR. Drone 2.0 Power Edtion, then simply head over to the following URL: ardrone2.parrot.com