Apple is out with another new ad, this time titled “Apple at Work – The Underdogs.”

The ad follows a team working on a new type of pizza box, one that’s round rather than square. The team works to get the prototype ready ahead of a meeting with their boss which, for some reason, reminds us of a female version of Steve Jobs. We’re sure that’s accidental.

The ad itself is a surprisingly humorous one considering Apple’s recent past with getting things wrong in that arena. The acting, coupled with great timing and an excellent script makes for an enjoyable three-minute ad, but that’s not the best part.

The best part is the fact that the pizza box shown in the ad is actually a real pizza box that apple came up with for use in its own Cafe Macs establishment.

The theory was that the circular boxes would allow employees to pick up their own pizza and transport it back to their desks without having to worry about their lunching soggy. In fact, the pizza box is even the subject of its very own patent, as highlighted by Cable Sasser on Twitter.

Apple’s Cafe Macs pizza boxes are so iconic within Apple that they even appeared when Steve Jobs died, with many of Apple’s employees signing them as a mark of respect. 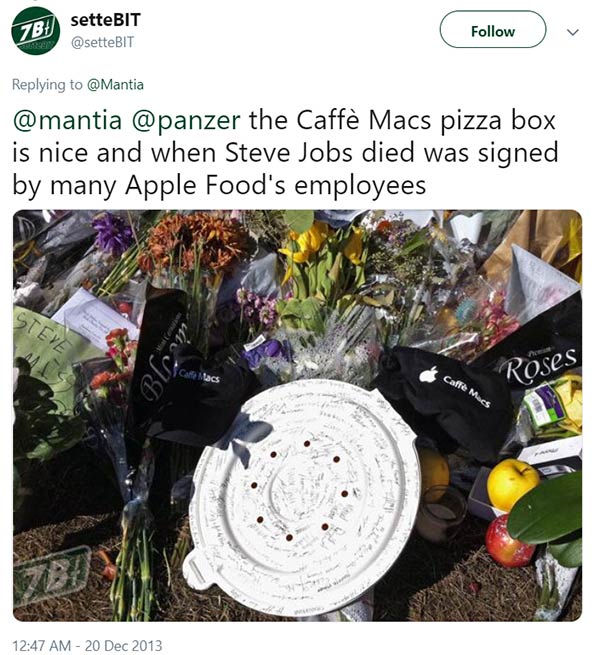 The combination of a great ad and a hint of truth running through it is what males this one of Apple’s best videos from its recent advertising push. Most people watching it won’t realize what they’re seeing, but for those familiar with Apple’s pizza boxes, it’s a great nod to those who make Apple employees’ pizza experience a little better each day.