The one-day Black Friday shopping extravaganza was teased earlier in the week by Apple when a dedicated webpage was made live, and our fears have been realized now that the online store is open in all regions, confirming that Apple is once again offering Gift Cards of varying values with select compatible purchases. 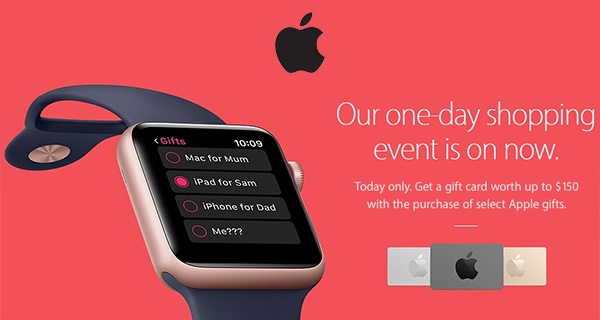 In all honesty, we didn’t actually hold out much hope of Apple taking the opportunity to heavily discount a range of products. Tim Cook’s company has historically proven that it would rather leave the major price cuts for official resellers to burden rather than discount their own products and potentially look to cheapen or devalue the brand. As part of a similar strategy to what was deployed in 2014, the last time when Apple took part in the sale, Apple is looking to entice shoppers in this Black Friday with Gift Card incentives up to the US$150 value depending on the product purchased.

Some people will actually love the idea of getting a relatively high value Apple Gift Card when an item is purchased, but it does come with a fairly huge caveat in our opinion; the incentive doesn’t apply to Apple’s latest products.

This means hardware like the iPhone 7, iPhone 7 Plus and the new 2016 MacBook Pro with Touch Bar are all in such high demand that Apple clearly doesn’t feel comfortable to also offer Gift Cards as part of that deal. In short, those devices are selling like hot cakes, so no incentive necessary. 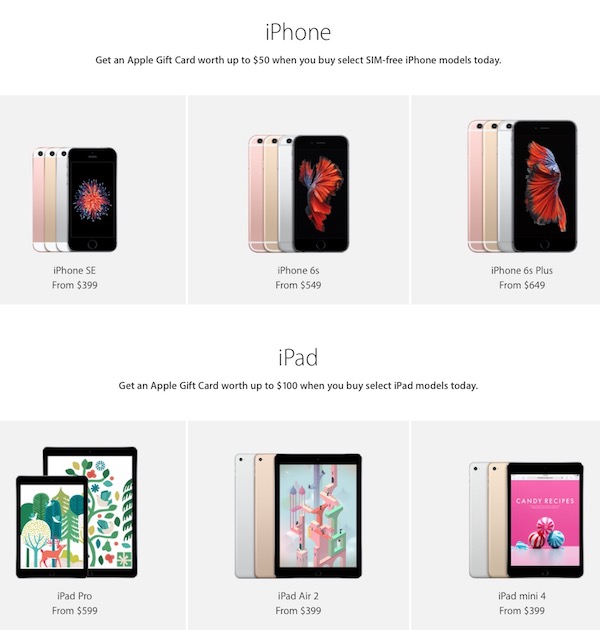 As part of the deal, Apple will be offering $25 Gift Cards with purchases of an Apple TV or Apple Watch Series 1. That value is increased to $50 for a purchase of an iPhone SE, iPhone 6s or iPhone 6s Plus, or $100 for those who go all out and splash the cash on an iPad Pro, iPad Air 2 or an iPad mini. In order to receive the highest value gift card of around the $150 mark, Apple is expecting consumers to walk out of the store with a compatible Mac, which doesn’t include the latest machines announced at the recent “Hello Again” Mac event, as mentioned earlier.