Apple today had a new patent application published in which details are provided of a laptop-like device which could act as a host for an iPhone or iPad, creating a kind of hybrid touch-screen MacBook which uses the iOS hardware as a source of computing power.

The patent, published by the U.S. Patent and Trademark Office on Thursday, is another take on an idea which has been tried multiple times by companies such as Motorola and Microsoft with limited success.

Apple’s patent shows that the company is at least looking into the possibility of joining that semi-illustrious company and having a bash at a hybrid device of its own.

From the technical drawings within the patent application, the device in question would closely resemble a MacBook computer, with the so-called “thin” device comprising hardware such as a screen, GPU and ports, but also being unable to function without an iOS device slotted into it.

Again, if the drawings are anything to go by then the iOS device would likely be placed where a MacBook’s trackpad would normally reside, possibly with the iPhone’s screen filling that role. It is also likely that any 4G LTE and WiFi capabilities offered by the iOS device would also be leveraged by the host. 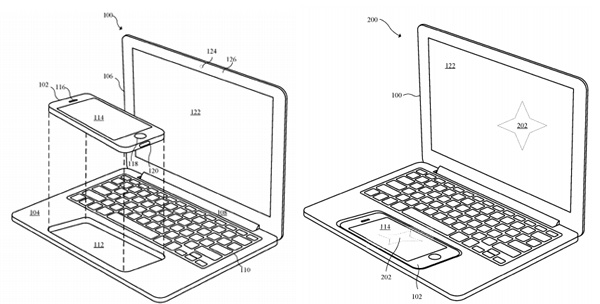 The iPad meanwhile is shown to embody the display of the hybrid MacBook, so a dedicated Smart Case for the tablet from Apple could make sense in that regard. 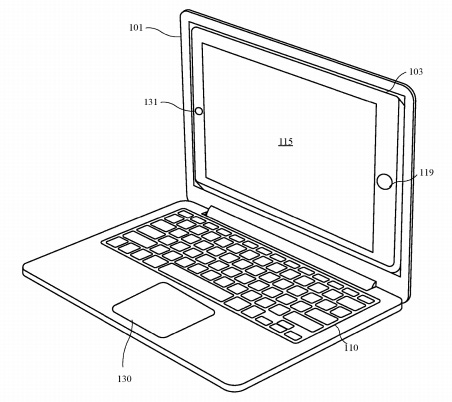 As Apple appears keen to continue its marketing strategy of pushing the iPad as a notebook computer replacement, we find it unlikely that this patent application will give birth to a new product category within the company, and given the fact we already know how the Mac-maker likes to patent anything and everything it comes up with in its labs, we are relatively confident this will not be something we will be lining up for any time soon.