Apple today has released a new firmware update for Apple TV. The set-top box has seen its software bumped to version 5.2.1, and as well as a bunch of the customary bug fixes, there have also been significant enhancements made to the Hulu Plus interface for 5.2.x firmware users.

Apple TV has not been particularly successful thus far, at least when compared to some of the Cupertino company’s other products. However, Tim Cook, who famously labeled Apple TV a "hobby", may be overseeing plans to expand the company’s interests in the market further. Talk of a ‘connected TV’ effort has been ongoing, and although analysts have constantly assured us that the fruit company does indeed intend to move beyond the current Apple TV setup, we’ve yet to see any solid evidence to corroborate this.

Still, if you’re in ownership of the current Apple TV device, you can now enjoy the relatively minor update by checking the details at the bottom of this post. The changes are certainly not of any real significance, but if you’re a Hulu Plus fan, you’ll notice a completely new interface. Having first become available to U.S. Apple TV users as of last July of last year, Hulu Plus has since been expanded to Japan, and offers subscribers access to a great deal of television and movie content at a fixed monthly rate.

The most significant alteration to the Hulu Plus UI is the all-new content categories, which can be noticed along the uppermost navigation bar. This makes it a great deal easier for you to hop between different categories, helping you source your content quickly and efficiently. 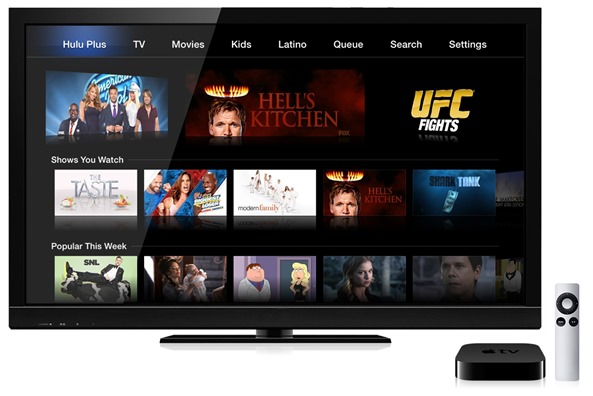 The new revamped Hulu Plus UI is available on 5.2 firmware as well.

Full changelog of Apple TV 5.2.1 update is as follows:

If you care about jailbreak on Apple TV 2G, DO NOT update to 5.2.1 firmware as it patches the Evasi0n exploit used in Apple TV 5.2 jailbreak.

If jailbreaking is not your cup of tea, you can update the normal way, by using the native facility within your Apple TV interface. Alternatively, you can also download the firmware file we have linked to below, and apply the update to your Apple TV via iTunes.