For years, the easiest way to set up an AirPort network and streaming media through AirPlay has been by using Apple’s AirPort Express base station. If you’re thinking of picking one up, you might be out of luck since some retailers’ stocks are dwindling, suggesting an imminent refresh. 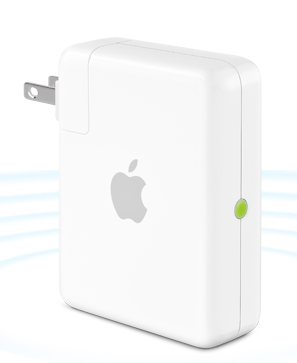 The AirPort Express is a slimmed-down version of Apple’s full-fledged router, the AirPort Extreme. For $99, boasting an Ethernet, USB and audio jack built right in, this base station is likely the cheapest way to play music across the network or share a USB device, such as a printer, all in a device that fits in your palm of your hand and can be plugged right into a regular power outlet. Despite its many qualities, the AirPort Express hasn’t received any significant update since its introduction in 2004, aside from draft 802.11n support, which was added back in 2008. Refreshing it sounds like a good idea, and Apple seems to agree.

While the product it’s still available from Apple’s online store, and allegedly in stock, inventory shortages can already been found at many of Apple’s authorized retailers. Even retailers as reputable as Amazon don’t expect to receive shipments for the next "2 to 5 weeks", while DataVision claims that the current generation of the AirPort Express has been discontinued.

Inventory shortages are common before any product refresh, if you’re thinking in Apple’s language. Apple often leaves retailers in the dark until the very last minute before new products are announced, therefore they’re often not aware of product refreshes, even when inventory for the current-generation product has run out. Amazon’s "2 to 5 weeks" timeline is likely accurate, therefore we advise you not to purchase an AirPort Express now and instead wait for the new model, unless you urgently need one.

(via Cult of Mac)