Apple To Host WWDC ‘12 On June 11? Online Schedule From Moscone West Suggests So

We are fast approaching that time of year again when Mac and iOS developers and enthusiasts descend on the Moscone Center in San Francisco to take part in Apple’s Worldwide Developer Conference. The annual conference, famed throughout the technology world is one of the biggest and most popular of its kind, attracting delegates from all over the globe paying thousands of dollars each for the privilege to be in attendance.

The conference itself is a chance for developers to experience hands-on workshops and presentations from Apple engineers who have created and designed the hardware and software that we work with on a daily basis. WWDC features all of the latest innovations and the hottest technologies found within iOS and Mac OS X, with attendees having access to over one thousand of Apple’s internal engineers, spread over five days. The primary focus for the event is to provide technical sessions for developers in order to demonstrate just what is capable of being done when using Apple’s two operating systems, but it also provides the development community a chance to meet and greet each other and share ideas.

Because of the insane popularity of WWDC, tickets generally sell out almost immediately meaning that all who wish to attend need to be hot off the block to guarantee their admission. The event generally happens in June, however the exact date is usually kept a secret until Apple are ready to make the announcement. For those developers who are keen to get some accommodation or flights booked, it may be worth while heading over the online schedule for the Moscone Center in San Francisco. The schedule itself has an array of corporate meetings booked in for the center, which as we all know is what Apple likes to call the event in an attempt to throw people off the track. 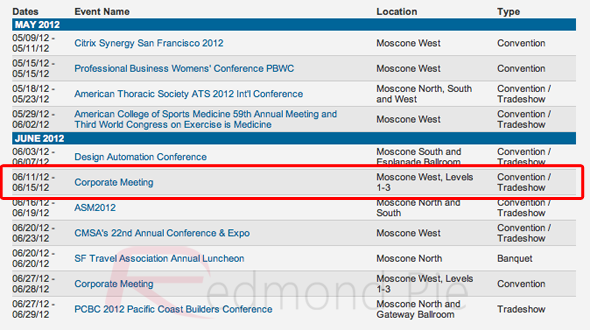 Only one of the corporate meetings on the schedule lasts for a week, the same length as the conference itself and begins on June 11, running up until the end of that working week. Considering Apple usually holds the event at that very building during the early part of June, it looks likely that those could be the official dates for the 2012 conference. Developers attending the Worldwide Developer Conference this year should be in for a treat, with it being likely that Apple will show off OS X Mountain Lion in some form, and possibly give a little glimpse of what is to come in iOS 6.

In Previous years, the fruit company have even used the event to announce the new iPhone, but with the iPhone 4S event being put back until October last year, it would seem unlikely that we will see an announcement of the next-generation Apple smartphone as early as June. If you are planning on scrambling for tickets for WWDC as soon as they become available, make sure you mark June 11th in your calendar.