The iPhone 5 has been in the public domain for over a week now, and during that period it has managed to shift over five million units, showing just how popular the device is going to be. The initial popularity doesn’t detract from the fact that a number of users have been experiencing issues with the sixth-generation device, one of which is centered entirely around a purple glare appearing on images taken with the 8-megapixel rear-facing camera on the handset. In a rather surprising email response, an AppleCare customer support agent has issued a response to one disgruntled photography fan.

iPhone 5 owner, Matt Van Gastel, has taken time out of his daily schedule to make his complaints about the purple flare issue known to Apple. As you might expect from a technical support call to a large company, the issue was escalated to a higher manager before ultimately having the details captured along with sample images and being sent off to an internal Apple engineering team for investigation. The initial response from the customer representative was that the purple haze appearing on the images was indeed very strange, but that opinion seems to have quickly changed when the engineering tram got involved.

The issue isn’t something that is isolated to a handful of people, and theoretically speaking, it should actually affect all iPhone 5 handsets. In typical Apple fashion; it looks like the problem occurs because of the way the user is holding the handset. After investigating the issue and analyzing the provided photographs, it seems that AppleCare support don’t see a hardware issue with the phone, instead choosing to recommend that we “angle the camera away from the bright light source when taking pictures“. In addition to that little nugget of photography advice, Apple’s engineering team are stating that the purple flare issue is to expected and is entirely normal for all iPhone 5s. 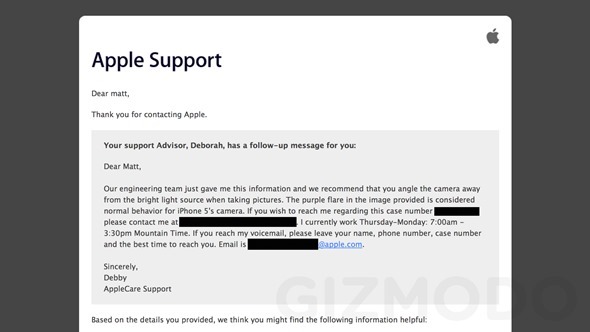 A number of photography professionals who have taken the time to look into the issue themselves have speculated that the problem could be caused by the type of glass that is covering the lens of the rear camera on the iPhone 5. It appears that Apple would disagree with that theory and think the issue can be overcome by simply holding the phone at a different angle. I haven’t personally experienced the purple haze issue with either of my iPhone 5s, but I am pretty sure that those who have will not be satisfied with this response. 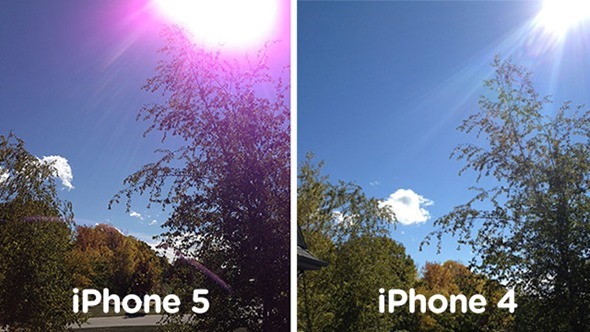