Apple Posts Apology To Samsung On Its UK Website, Says “They Are Not As Cool”

Apple have this morning updated their customer facing website in the United Kingdom to comply with an earlier ruling made by a British court. A relatively small link has appeared at the bottom of the Apple.com/UK homepage that forwards customers to information pertaining to the ruling made in July of this year in the High Court of Justice of England Wales.

Apple have been involved in a long running patent battle with Samsung that has seen the two companies come head-to-head in various court rooms across the world. Although a lot of those trials have resulted in favorable decisions for Apple, the British courts ruled on July 9th 2012 that Samsung Electronics had not infringed on the design of the iPad when designing and building their own Galaxy Tab slate devices.

Apple had argued that the Samsung Galaxy Tab 10.1, 8.9 and 7.7 were barely indistinguishable from the iPad and therefore were in breach of their registered design. Although the overseeing judge disagreed, it was a bitter sweet victory for Samsung considering his opinion was based on those devices not being as "cool" as the iPad or having the same "extreme simplicity" that the Apple creation possesses.

Although Apple have fully complied with their legal obligations in this matter, something tells us that Samsung won’t be to happy about the content of the post. The initial paragraph of the post on the Apple website starts by giving some back story to why they have updated the website with this information: 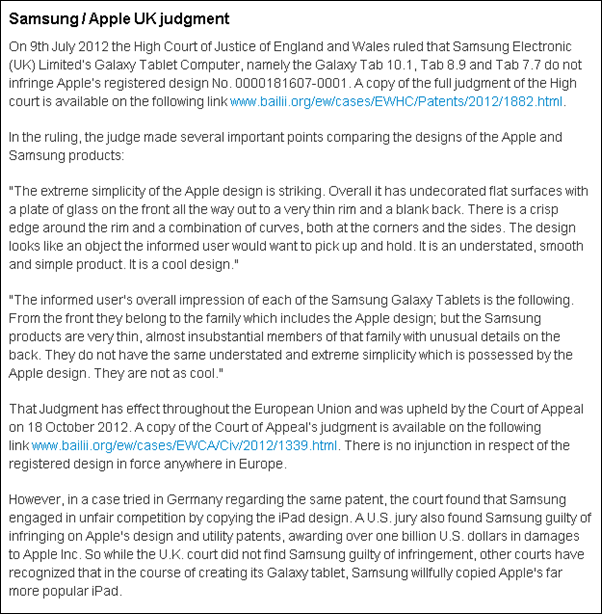 Apple have also provided a link to the full judgment of the British High Court before continuing into what can only be described as taking a pop shot at their bitter rivals. Reference is made to the comments of the judge and his final verdict, in which he described the iPad as "a cool design" and that informed users wouldn’t confuse the Galaxy Tab with the iPad due to the fact that although they look like they belong to the same family from the front they don’t posses the same "extreme simplicity" of the iPad.

Apple have complied with the ruling, but have done so in their own way.