As expected, Apple has today announced that it has extended support for Apple Pay into yet another country. As initially reported back in June, Apple had used this year’s WWDC opening keynote to briefly touch on the progress and future plans for Apple Pay, announcing that the contactless payment solution would be coming soon to Switzerland, Hong Kong and France. It’s been just over three weeks since that announcement, but we can now confirm that Apple Pay is officially available to use in Switzerland.

The launch of Apple Pay in Switzerland means the immediate support for Visa and MasterCard cards issued by Corner Bank, Bonus Cards, and Swiss Bankers. 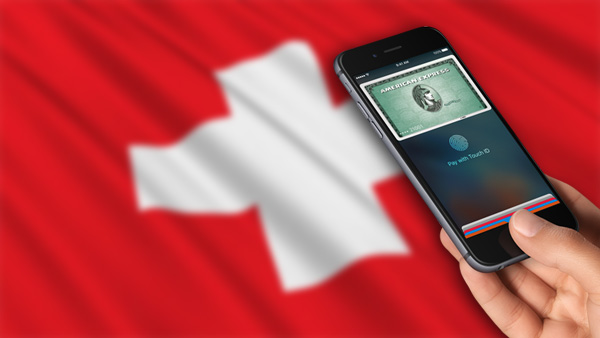 Any consumer who banks with one of those financial institutions, and who has a credit or debit card issue through their account, will be able to set up and adopt Apple Play as a method of contactless payment in shopping outlets, online and through supported mobile apps. As is usually the case with an initial market launch, it’s likely that additional banks and institutions will be added to the supported list as time progresses.

Consumers with an eligible card are able to scan and add the debit or credit card directly in the stock Wallet app that ships with iOS device. This functionality is found in iOS 8.1 or later, and is compatible with the iPhone 6 or later. Apple Watch owners can get that compatibly with an iPhone 5 or later as long as there is an Apple Watch connected to the device.

Apple Pay is not only an extremely safe and secure way to pay for goods and services, but it’s also highly convenient given the fact that once a compatible card is registered it takes just a quick flick of the wrist or flash of an iPhone to process a payment.

One of the immediate challenges whenever Apple Pay is adopted into a new country is getting retailers on board to accept the payment mechanism. With this launch, a number of prominent outlets in Switzerland are already primed to accept Apple Pay, such as Apple, ALDI SUISSE, SPAR, Press & Books and Hublot, but that list of course will grow over time as we have seen it do so in other countries where Apple Pay has been launched. Switzerland becomes the seventh country to support Apple Pay, with France and Hong Kong expected to be not long behind.

Originally launched back in 2014 in the United States, Apple Pay is already available in Canada, Australia, China, United Kingdom and Singapore.