Apple To Live Stream October 16 iPad Event, Here’s Where And How You Can Watch It

As has long since been suspected, Apple will be holding a special event next week on October 16th, and likely topics of conversation will pertain to the iPad, OS X Yosemite, iOS 8.1 and possibly a couple of new Macs as well. Should all of these products roll out at the same time, it’ll be a fairly busy affair, and for those wishing to tune in, Apple will be live streaming proceedings right from Town Hall.

Last month, the Cupertino giant took the wraps off the iPhone 6, iPhone 6 Plus and Apple Watch, as well as introducing a new category of service called Apple Pay. The event went down well, with strong sales of the new smartphones coupled with the acclaim that the company’s first major wearable has garnered, but for those watching online, things didn’t run so smoothly for a few. 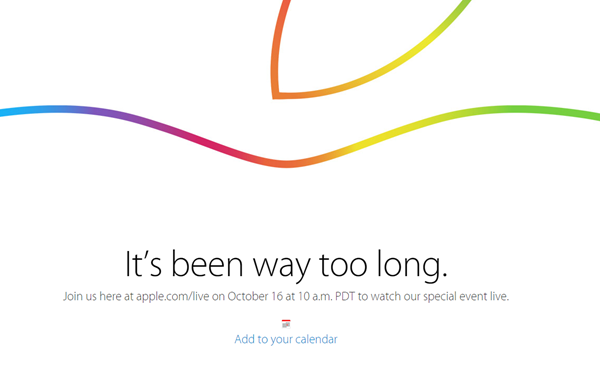 In fact, given Apple’s reputation for smooth, seamless functionality, the live stream was a slight mess, with a few left unable to watch the historic event held at the Flint Center for the Performing Arts. But as has just been confirmed, Apple will be streaming the October keynote once again, and let’s hope that the issues that beset last month’s shenanigans have been ironed out once and for all.

It’s expected that the iPad Air will be in receipt of a Touch ID fingerprint sensor, and despite its slender profile, the Mac maker’s prized tablet will also likely be thinner. The A8 processor will also be a nigh-on certainty, and although we’ve heard relatively little of a potential iPad mini refresh, the smaller slate could also be treated to Touch ID and a newer SoC.

The Mac mini hasn’t seen an upgrade for two years now, and as per a number of reports, will be getting some attention, while the iMac, which saw a design overhaul in 2012 and a Haswell refresh last year, might finally receive a Retina display. From what we can gather, only the 27-inch model will see the high-res panel, with the 21.5-inch variant apparently staying as is for the time being, but if you’ve been waiting for the all-in-one desktop to deliver a sharper experience, your wait may nearly be over.

OS X Yosemite has already surpassed three Golden Masters, so its release is imminent, and with iOS 8.1 pushing Apple Pay among a myriad of other features, there’s plenty to look forward to.

Apple TV will also be presenting the coverage, although you’ll need to be in ownership of a second- or third-gen model running software version 5.0.2 or later.