Apple has just launched an all-new microsite entitled ‘Everything changes with iPad,’ offering a host of sections with key info on what the company’s flagship slate is capable of. Take a closer look right here.

The new section seeks to make it easier for consumer and enterprise users to discover the many advantages of the iPad’s ownership, and while, back in 2010, many questioned the necessity of the original iPad when we already had the iPhone, there’s no debating that the larger display can offer so much more than a mere handset. 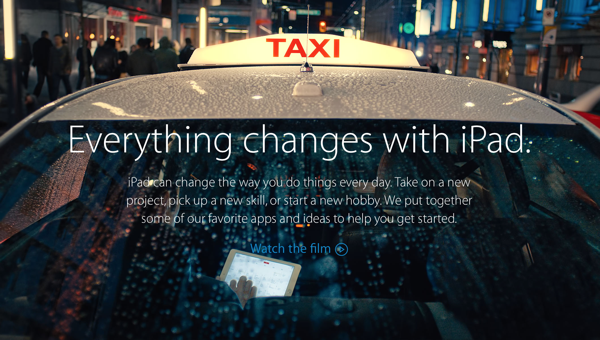 The microsite is divided up into numerous sections, covering ‘Cooking with iPad’, ‘Learning with iPad’, ‘Small Business with iPad’, ‘Traveling with iPad’, ‘Redecorating with iPad’, and ‘Why iPad?’, so no matter what your aims and goals may be, there’s a way in which the slab can enrich and improve your experience. Each category includes details of apps that can be used to aid users when, say, on their travels or running a small business, and it’s an elegant, well-organized and informative addition to Apple’s main website.

Despite Apple’s efforts to conquer the education and business sectors, there’s still the feeling that an iPad is a bit of a luxury product, and notably, that its primary purpose is consumption. The downloading of games, watching movies and browsing the Web seem to be among the most popular pastimes of your average iPad user, and so the purpose of this microsite is to ensure that the iPad’s other uses are made clear to everybody.

The iPad line-up consists of the 9.7-inch iPad Air (2) and iPad mini (3), but according to reports, they’ll both be joined by a larger model in the very near future. Rumors of an iPad Pro have been mainstay among the tech headlines, and with a larger, ~12-inch display, would compete with the likes of Microsoft’s Surface Pro 3 among a slew of other professionally-targeted tablets.

For now, though, the Air-mini duo covers the needs of most users, and if you’d like to find out a little more of what the iPad is capable of, point your browser to the new iPad microsite here and have a look.