Apple’s Developer Portal has been offline for some time now, and with reports of a claimed security breach by a security researcher still echoing across the internet, the iPhone maker has today updated its users and developers on the situation, whilst also offering more information on how the company intends to restore service to its developer hub. More details regarding the whole situation in its current stage can be found right after the jump.

In order to avoid a repeat of the recent security breach which has seen developers’ details potentially being compromised, Apple decided to keep the Developer Portal offline while it worked on securing it. This has led to the extended downtime, and Apple says that it will be restoring the whole service in a staggered and controlled manner, starting with Certificated, Identifiers & Profiles, Apple Developer Forums, Bug Reporter, pre-release developer libraries and videos.

Once all of that is back online, Apple intends to restore software downloads. This means that beta versions of Apple’s iOS 7 and OS X Mavericks will once again be downloadable via the Apple Developer Portal, as will the new version of Xcode. Once all of this is online, Apple will bring everything else that remains back up, also. 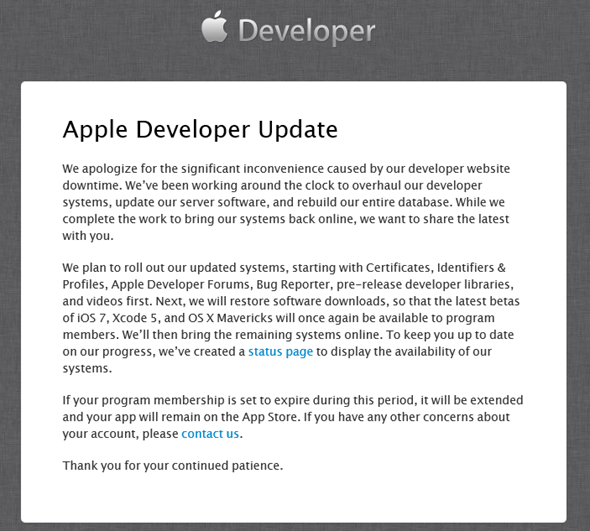 Apple posted the information to its website, as well as emailing its registered developers with the latest update.

As part of the update, Apple has also posted a tracking site which makes it easy for developers to see which areas of the developer program are still affected, and which have already returned to service.

Developers are currently waiting for the next beta release of iOS 7 to be made available for testing, which has yet to happen, presumably due to this current Developer Portal situation. The latest Developer Preview of OS X Mavericks has been made available via the Mac App Store, though, regardless of Apple’s inability to offer release notes and the like via its developer website.

Hopefully it won’t be too long now before that iOS 7 beta is release, at least.

We will definitely update our readers when Apple issues another update regarding the whole situation. Till then, keep calm and wait for the Developer Portal to go live swiftly in the coming days.