A new, low-end iMac has been introduced into Apple’s lineup, with cost-conscious educational institutes the target of the stealth product update.

Apple has been known to launch into all manner of fanfare when introducing new products, but it has also been known to release updates to its lineup without so much as a whisper. It’s the latter approach that has seen an update to the iMac line of hardware, with a new model for educational institutions being added.

Priced at a dollar shy of $1,100, the new model is based on the existing 21.5-inch model, but with less capable innards compared to its $200 dearer big brother.

For your $1,099, assuming you’re boing for a school or some such, will get you an Intel i3 processor and 4GB of RAM. Storage is taken care of by a 500GB spindle hard disk. The consumer focused iMacs come with double the memory and more beefy CPUs, but they also cost more. The new, entry level iMac is aimed at budget conscious schools and higher education bodies that want to provide Macs to their students. In fact, the machine replaces the $999 model that was introduced around 18 months ago.

Currently, this new model is only available to purchase if you’re one of those bodies – students are unable to take advantage of the new lower price point via the usual education focused Apple Store. 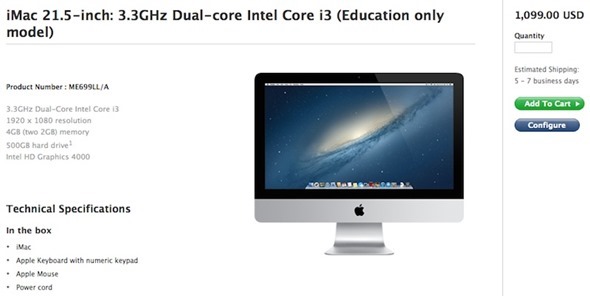 Nobody really knows when this new iMac was introduced, such was the stealth with which Apple brought it into its lineup, but we’re fairly certain it wasn’t that long ago. Apple does like to keep its products fresh, while also keeping its education customers up to speed at as low a price as possible. This new 21.5-inch model with cheaper, lower-end hardware fits the bill nicely.

The iMac is currently hugely popular amongst all manner of customers, with its space saving design and considerable power making it perfect for business, schools and personal use alike. And did we mention it’s absolutely gorgeous, too?