Apple has today released beta 3 of OS X 10.11 El Capitan to registered developers. The release of El Capitan beta 3 comes just over two weeks after beta 2 was pushed out for testing purposes and continues the development roadmap of the operating system that was initially introduced during this year’s WWDC keynote in the beginning of June. In addition to seeding the third OS X 10.11 beta, Apple has also flipped the switch on beta 3 of its watchOS 2 operating system designed specifically to power the Apple Watch.

OS X El Capitan can be classed as an evolutionary version of Apple’s Mac operating system in the fact that it was developed to build on and stabilize the work that has already been implemented with OS X 10.10, or Yosemite as it’s more commonly known. 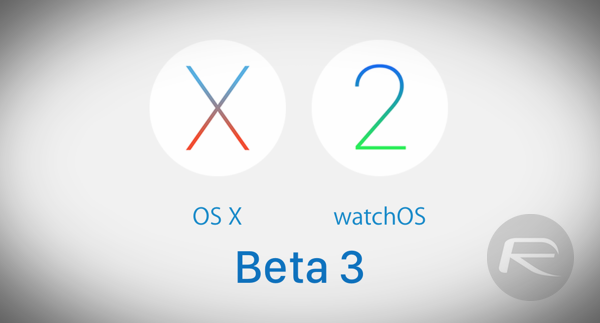 If you already have OS X 10.11 El Capitan installed on one of your Macs, you can grab the beta 3 update by launching the Mac App Store, clicking on the ‘Updates’ tab and then updating from there.

If you’re installing El Capitan beta from scratch, then you can head over to the Apple Developer Program website to grab the latest pre-release software. We have a full guide on this here: Install And Dual-Boot OS X El Capitan With Yosemite On Separate Partition [Tutorial].

The latest beta of watchOS 2 has followed the same release schedule as El Capitan and iOS 9. After initially being introduced at WWDC 2015 a month ago, this third beta comes two weeks after the last developer seed was released.

Like the initial betas, watchOS 2 beta 3 requires an iPhone running iOS 9, which is also in developer preview stages. If you’re already running watchOS 2 beta on your Apple Watch, then simply launch the Watch app on your iPhone, then navigate to General > Software Update to grab beta 3.

If you’re starting fresh however, then first you need to install iOS 9 beta on your iPhone, rest is the case of downloading a provisioning profile from the Apple Developer Program website in order to push the watchOS 2 update onto your Apple Watch. 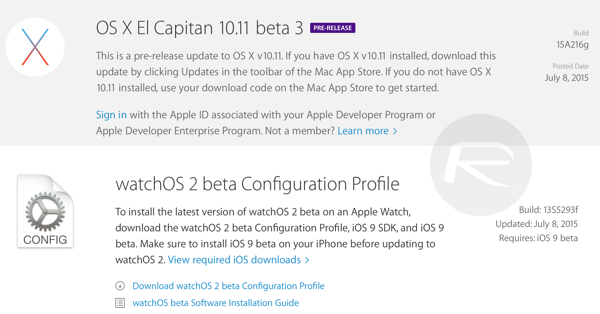 watchOS 2 represents Apple’s first attempt at revamping the software that powers the Apple Watch. After initially launching the product with the first version of watchOS, the second major iteration introduces a number of powerful additions such as the ability to install and run truly native apps. Developers can now also build apps that take advantage of a lot more of the device’s built-in sensors.

As OS X 10.11 and watchOS 2 are in beta stages, therefore it’s recommended that you install them on test hardware rather than your daily drivers.