Witnesses on the scene in New York are reporting that a snowblower has accidentally collided with one of the glass panes in Apple’s Fifth Avenue Retail Store. It’s certainly not unusual to see a heavy piece of machinery snowblowers on the streets of New York City as part of the cleanup crew that is dealing with the aftermath of a heavy snow storm. However, Apple employees will be slightly dismayed to see that such substantial damage has been caused to the $450,000 piece of glass that forms part of the store’s iconic “cube” exterior.

An Apple employee based at the Fifth Avenue store has reportedly confirmed the incident, stating that substantial damage has been inflicted on one of the glass panels situated in the southeast corner of the building. Aside from the fact that the Fifth Avenue store has been designed and constructed as a monolithic glass cube, it also appeals to shoppers the world over thanks to it being open seven days a week, twenty-four hours a day. The same store employee has confirmed that the accident hasn’t cause any disruption to shopping activities and that the store will continue to operate as normal in spite of the badly cracked glass panel.

The famous Fifth Avenue store originally opened back in 2006, with late Apple co-founder Steve Jobs being credited for the design. After attracting visitors, shoppers and Apple fans from all around the world, the Cupertino based company took the decision to revamp the store in 2011, removing the ninety individual glass panes that formed the original construction and replaced them with fifteen custom made panels that are visible today. Apple is said to have spent almost $7 million of their cash reserves on the project at the time, although it looks like they’ll need to fork out a little more to replace the current damage. 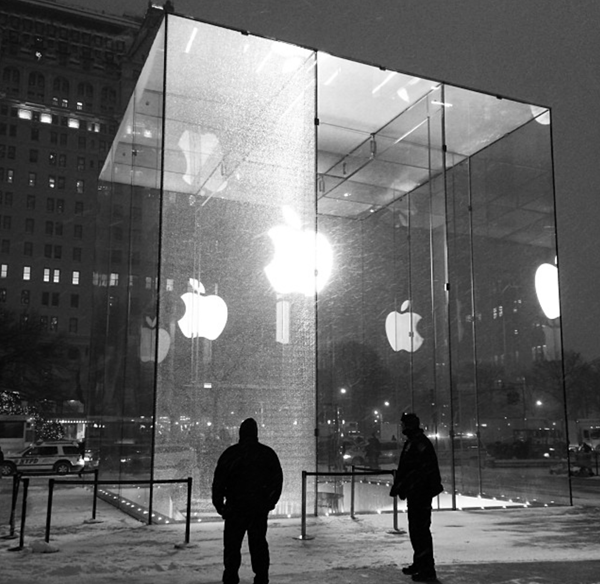 When you make the decision to build such an impressive structure entirely from glass panels, then it’s almost inevitable that some weather related mishaps can occur. The cracked glass incident can be added on top of last year’s incident that caused the underground section of the store to be flooded, an issue that was blamed partly on the bad weather and partly on an unforeseen drainage issue. It’ll be interesting to see if Apple can get the glass pane replaced without causing any disruption to their opening hours.