Apple CEO Tim Cook has used the second part of an interview with CNBC’s Mad Money host Jim Cramer to talk about things other than Apple’s recent earnings call and financial results. Earlier, Cook hinted at some new innovative products that Apple has in the pipeline for the coming years, setting aside critique that Apple has reached its peak. Rather than carry on discussing the latest earnings report, and Wall Street’s negative reaction to those results, Cook took the discussion onto a more personal level by talking about what personally motivates him to do the work that he does, as well as shedding some light on people that have inspired him to get this far into his career and become the person that he is today, from a personal and professional perspective.

Most people who end up being insanely successful in business, and in life for that matter, usually have a set of people, both past and present, who they look up to, admire, and draw inspiration from. Tim Cook is no different. Unsurprisingly, Cook counts Apple founder Steve Jobs as one of his biggest inspirations and influences, stating that he has “incredible love and respect for Steve”, and that “there’s never been anyone like him”. Cook also counts Martin Luther King Jr. and Bobby Kennedy as people who inspire him through their commitment to fighting for human rights and “pushing humanity forward”. 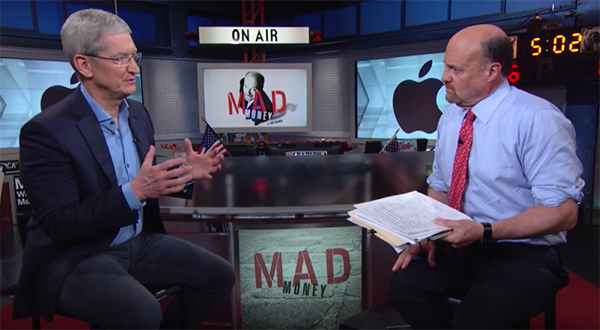 Apple’s CEO also touched on what the company is trying to achieve with the various products that they develop, almost creating a mission statement for the company. Cook uses the second part of the interview, which is now available to watch, to specify that Apple’s goal is to create products “that give people the ability to do things they couldn’t do before”. After specifically mentioning how the iPad is about to revolutionize education, and how FaceTime allowed people to communicate like they couldn’t do before, Cook explained that those are ultimately the things that inspire him to continue creating and guiding Apple forward in a “way that’s right and just”.

Cook also touched upon the sensitive iOS encryption vs the government issue, saying that customer privacy is a subject far more extensive than just the San Bernardino case and is a complicated one indeed. He also added a rather stingy line saying that the government has become “quite dysfunctional”.

The second part of the interview is available to watch right now, and is definitely worth viewing, even if it’s just to see how Cook responds to being asked about specific comments that have been made by Presidential candidates Donald Trump and Bernie Sanders about the state of corporations in America.