Samsung’s venture into the Android arena really paid off well for the Korean electronics giant, and the company made it to the pinnacle of fame through it Galaxy lineup of flagship devices. It’s become kind of tradition for Samsung to follow up with a Galaxy flagship every year, and they’ve been delivering what people have been hoping for, for the most part. Since the release of Galaxy S III i9300 last year, speculations started surfacing about what the next flagship, Galaxy S IV, would be like. First, it was specs, then design, and then pretty much everything. Well, seems like the rumor mill has far from settled down.

It’s quite natural for devices to have leaks of images, specs sheets and whatnot prior to the actual launch, ensuring that the hype never dies down. Earlier, we brought you news of the leak of an image that showed the upcoming Galaxy S IV, courtesy of SamMobile. While the image looked authentic enough, there was still some doubt surrounding it. However, now, in what could only be termed ‘hiding in plain sight’, we have what could be the first proper press image of the elusive, fourth-generation Galaxy phone.

Coming from Picasa, the image seems to have been there unnoticed for quite some time before people recognized it as a possible rendition of the upcoming Galaxy S IV. Oh, and the fact that the image’s title on Picasa says “Galaxy S IV GT-I9500 Product Image” does help, too.

There are a lot of things to consider if we’re to believe this image is legitimate. First, it differs quite a bit from what SamMobile’s earlier leak suggested, and shows a larger physical home button as compared to the Galaxy S III. Then, it also appears to have a much thinner bezel when compared with the current-reigning flagship, and also appears to have more symmetrical corners, giving the device an over-all better look and feel. 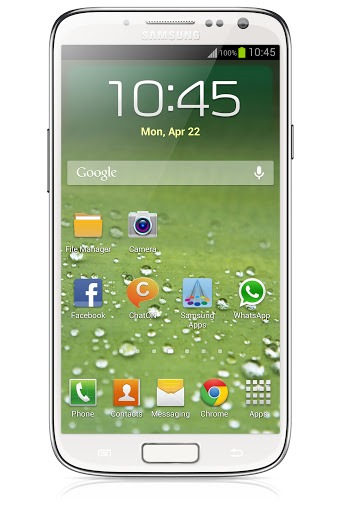 Another interesting thing to note here is the date that’s shown on the home screen. When Galaxy S III images were initially leaked prior to the device’s announcement, the date displayed said May 3, which was exactly when Samsung announced the device to the general public. Now, this leaked “product image” of the S IV says April 22. Could it be that the world would catch its first official, confirmed glimpses of the device on this day? Only time will tell.

The leaked press shot, in its full glory, can be found at the source link below.